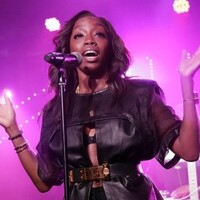 Estelle net worth: Estelle is a British singer-songwriter, rapper, voice actress, and producer who has a net worth of $3 million. Estelle was born in Hammersmith, London, England in January 1980. She is known for mixing various musical styles which includes soul, reggae, R&B, hip hop, and dance. She worked in the record store Deal Real in London and then started performing. She met Kanye West at a restaurant and then later met John Legend who helped start her career. Her debut studio album The 18th Day was released in 2004. Estelle's second studio album Shine was released in 2008 on Atlantic Records. The album was certified Gold in the UK and reached #6 on the UK chart and the US R&B chart. She released the albums All of Me in 2012 which reached #9 on the US R&B chart and True Romance in 2015. Her most popular single "American Boy" (featuring Kanye West) was released in 2008 and was certified 2x Platinum in the US and Platinum in the UK and Australia. The song reached #1 in the UK and the Top 5 in Australia, France, Germany, Ireland, New Zealand, and Switzerland. She also won a Grammy Award for Best Rap/Sung Collaboration for "American Boy". Estelle has done voice work for the television series Steven Universe since 2013. She has also appeared in episodes of the TV series Real Husbands of Hollywood in 2013 and Empire in 2015.