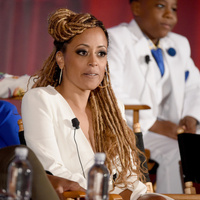 Essence Atkins net worth: Essence Atkins is an American actress who has a net worth of $5 million dollars. Essence Atkins was born in Brooklyn, New York, and began her professional acting career in the mid-80s with a guest-starring role on "The Cosby Show". From there she went on to appear in guest starring, recurring, or starring roles on multiple series throughout the 90s, including, "Family Matters", "Saved by the Bell: The College Years", "Under One Roof", "Malibu Shores", "The Parent 'Hood", and "Promised Land". She began to gain wider notice when she was cast on the comedy, "Smart Guy", and then went on to appear in television movies and films throughout the late 90s, including "Love Song", "How High", and "Deliver Us from Eva". She became a household name with her role on "Half and Half", and has since gone on to split her time between film and television work. She currently stars on the show, "Mr. Box Office".