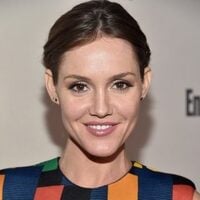 Erinn Hayes Net Worth and salary: Erinn Hayes is an American actress who has a net worth of $3 million dollars. Hayes was born Erinn Carter in San Francisco, California in May 1976. From 1999 to 2011 she appeared in video shorts. She appeared in the TV series Providence in 2011 and had a recurring role as Brenda in On the Spot in 2003. Hayes has also appeared in the TV shows The West Wing, CSI: Crime Scene Investigation, Everwood, Will & Grace, Significant Others, Kitchen Confidential, The Winner, Unhitched, Worst Week, Grey's Anatomy, Parenthood, Royal Pains, Two and a Half Men, Desperate Housewives, Suits, Guys with Kids, Parks and Recreation, Workaholics, and Growing up Fisher. Starting in 2008 she has been known for her role of Dr. Lola Spratt on the Adult Swim comedy Childrens Hospital. She has appeared in the movies They Came Together, Hits, Final Stab, The Watch, It's a Disaster, and Rumor Has It… Hayes has written the shorts Dress Gallery, Carnata, and Challenge Dot Com. She was an associate producer on Part Time Fabulous in 2011. Erin married Jack Hayes in 2004 and the couple has two daughters. In 2016, Erinn began starring in the CBS sitcom Kevin Can Wait co-starring Kevin James. After the first season, it was revealed that Erinn had been replaced by Leah Remini, Kevin's former co-star on King of Queens. It was a somewhat controversial and unusual move to replace a starring actor on a popular sitcom after one successful season. Many did not believe the news until Erinn confirmed the changes over social media.