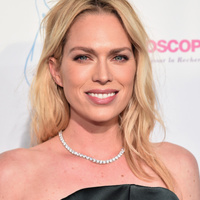 Erin Foster net worth: Erin Foster is an American actress, comedian, and writer who has a net worth of $2 million. Erin Foster was born in Los Angeles, California in August 1982. From 2005 to 2006 she had a recurring role as Heather in the television series The O.C. In 2015 she stars in the TV series Barely Famous. Foster has starred in the movies Crave, Cellular, The Darkroom, He's Such a Girl, Circle, and Trauma Team. She has also appeared in episodes of the TV series Roswell High, Judging Amy, CSI: Crime Scene Investigation, Reno 911!, Gilmore Girls, American Dreams, House M.D., Without a Trace, Castle, Law & Order: LA, and NCIS: Los Angeles. She wrote for the TV series The New Normal in 2012 and is the executive producer of the series Barely Famous. Erin is the daughter of David Foster. She is the sister of Sara Foster, step-sister of Gigi Hadid, and ex-stepbrother of Brody and Brandon Jenner.