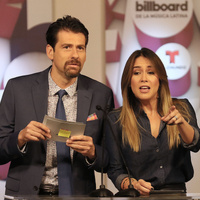 Erika de la Vega Net Worth: Erika de la Vega is a Venezuelan actress and television personality who has a net worth of $15 million. Erika de la Vega was born March 13, 1975. Vega started her career on a radio show called The Monster in the morning with Luis Chataing, who has been the face and voice of Channel AXN and Prime Time news channel Sony Entertainment Television with Chataing. In April 2006, she was elected (along with Argentine Monchi Balestra) to compete in the international competition musical talent search Latin American Idol, on Sony Entertainment Television, which airs from Buenos Aires to all Latin America. She has been credited to date for hosting Seasons 1-4 of Idol. In late 2011 she signed a contract with Venevision for a talk show titled Erika Type 11—a title which also conveyed that the program aired at 11:00 p.m. The series premiered on March 19, 2012 and marked her official Venezuelan television comeback after six-year absence (within which time she gave birth to a son). That April she was appointed by Joaquín Riviera (general producer of TV) to host the Interactive Gala of Beauty of Miss Venezuela 2012, which aired on primetime. She would repeat the role the following year. Erika de la Vega currently has a talk show on E!. She also holds a degree in accounting.