How much is Eric Stonestreet Worth?

Early Life: Eric Stonestreet was born Eric Allen Stonestreet on September 9, 1971, in Kansas City, Kansas. His mother, Jamey, worked as a teacher's aide, and his father, Anthony, owned a retail business in Leavenworth. As a youth, Eric was interested in being a clown, so he came up with a clown character called Fizbo and began performing at children's birthday parties by the age of 11. Decades later, the name Fizbo was resurrected for a clown character Eric played on "Modern Family." Stonestreet attended Piper High School and Kansas State University; he joined the Pi Kappa Alpha fraternity and earned a sociology degree in 1996. As a college student, he appeared in school plays, such as "Prelude to a Kiss," "All My Sons," and Twelfth Night," and after graduation, he took improv classes at Chicago's ImprovOlympic and Second City Training Center, where he learned from future comedy superstar Tina Fey.

Career: Eric moved to Los Angeles to pursue an acting career, and he landed a guest-starring role on ABC's "Dharma & Greg" in 1999. The following year, he made his big screen debut as a hotel desk clerk in the critically-acclaimed film "Almost Famous," appeared on the game show "I've Got a Secret," and guest-starred on "Malcolm in the Middle," "Party of Five," "ER," and "Spin City." Stonestreet then appeared on "The West Wing" (2001), "Greg the Bunny" (2002), and "Providence" (2002) and began a 12-episode stint on "CSI: Crime Scene Investigation" as Q.D. technician Ronnie Litre. In 2003, he appeared in the feature films "F.A.T." and "Girls Will Be Girls" and the short film "Street of Pain" and followed them with "Straight-Jacket" and "Knuckle Sandwich" in 2004. In 2005, Eric co-starred with Ewan McGregor and Scarlett Johansson in the Michael Bay film "The Island," which grossed $162.9 million at the box office.

Stonestreet then starred in the 2006 television film "13 Graves," and in 2007, he appeared in the film "Stories USA" and the TV series "Crossing Jordan," "Bones," "American Dad!," and "On the Lot." He also guest-starred on 2008 episodes of "The Mentalist," Pushing Daisies," and "NCIS." Eric had a very good year in 2009, appearing on "Monk," "Scare Tactics," and "Nip/Tuck" and landing the role of a lifetime: openly gay stay-at-home dad (later a music teacher and football coach) Cameron "Cam" Tucker on "Modern Family." The series aired 250 episodes over 11 seasons and won more than 100 awards. While starring on "Modern Family," Stonestreet co-starred with Cameron Diaz in "Bad Teacher" and Jason Bateman and Melissa McCarthy in "Identity Thief," voiced Minimus on 16 episodes of the Disney Channel's "Sofia the First" (2013–2018), appeared on "Sesame Street" (2014), starred in "Weird Al" Yankovic's "Tacky" video, and competed on "Jeopardy!" (2015). He also lent his voice to "The Secret Life of Pets" and "The Secret Life of Pets 2," which grossed $875.5 million and $430 million at the box office, respectively. In 2020, Eric served as a guest judge during "America's Got Talent" auditions, filling in for Heidi Klum when she was out sick.

Personal Life: Eric has been in a relationship with pediatric nurse Lindsay Schweitzer since 2016; the couple met in Kansas City at a Big Slick Charity event. Stonestreet supports the LGBTQ community, and when Rick Santorum, an opponent of gay rights, asked Eric to pose for a picture for him, he refused. Stonestreet is a sports fan, and he became part-owner of the MLB team the Kansas City Royals in 2019. He also attends Kansas State University football games and has participated in numerous NASCAR events. In April 2020, Eric competed on "Who Wants To Be A Millionaire," winning $125,000 for the Kansas City charity Building Hope for Autism; his sister, Mauria, serves as executive director of the organization.

Awards and Nominations: Stonestreet earned three Emmy nominations for his performance on "Modern Family," winning Outstanding Supporting Actor in a Comedy Series in 2010 and 2012. He also received three Golden Globe nominations for the show as a well as nominations from the Critics Choice Television Awards, Gold Derby Awards (including Comedy Supporting Actor of the Decade), Online Film & Television Association, Screen Actors Guild Awards, Teen Choice Awards, Television Critics Association Awards, and "TV Guide" Awards. The cast of "Modern Family" won a Gold Derby Award for Ensemble of the Year in 2010 and Screen Actors Guild Awards for Outstanding Performance by an Ensemble in a Comedy Series in 2011, 2012, 2013, and 2014. 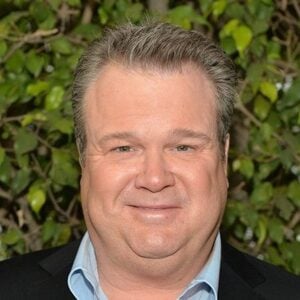