Eric Stoltz net worth: Eric Stoltz is an American actor, director, and movie producer who has a net worth of $5 million dollars. He rose to fame in the 1980s in movies like "Mask" and "Some Kind of Wonderful." He was nominated for a Golden Globe for Best Actor for his role in 1985's "Mask."

Early Life: Eric Cameron Stoltz was born on September 30, 1961, in Whittier, California, a suburb of Los Angeles. His mother Evelyn and father Jack were both teachers. His mom was also a violinist. He grew up in American Samoa and Santa Barbara, California. He has two sisters named Catherine and Susan. His family moved to American Samoa when he was three for his dad's job as principal of a high school. His family moved to Santa Barbara when he was eight. As a kid, he had a job playing piano for local musical theatre productions. In the 1970s he was part of a repertory company that performed 10 plays at the Edinburgh Festival. He attended San Marcos High School in Santa Barbara. Anthony Edwards and Kathy Ireland also went to the same high school.

He started his professional acting career in 1978 when he was on the television show "James at 15"  and in the TV movie "The Grass is Always Greener Over the Septic Tank." He moved back to the U.S. in 1979. Stoltz enrolled at the University of Southern California to study drama. He dropped out after his junior year and moved to New York to study acting with Stella Adler in 1981.

Career: In 1982, he was cast in a minor role in the iconic film "Fast Times at Ridgemont High." He became friends with writer/director Cameron Crowe during filming and Crowe promised to cast Stoltz in all of his future films. Crowe kept his promise and cast Stoltz in his next four movies, 1984's "The Wild Life," 1989's "Say Anything…," 1992's "Singles," and 1996's "Jerry Maguire." However, Crowe broke his promise after that and has never cast Stoltz in any of his projects since "Jerry Maguire."

Stoltz was listed as one of twelve "Promising New Actors of 1984" in John Willis' Screen World, Vol. 43.

Stoltz worked as a production assistant on the films  "Illegally Yours" in 1988 and "Say Anything…" in 1989 to learn about the production side of filmmaking.

In 1985, he played the role of Rocky Dennis in "Mask," which earned him a Golden Globe nomination for Best Actor. During the 1980s he also appeared in John Hughes' "Some Kind of Wonderful," "The Fly II," "The Wild Life," as well as on television on "Fall Guy," "St. Elsewhere," and "A Killer in the Family." He was cast as Marty McFly in "Back to the Future" and got about a month of filming in before being replaced by Michael J. Fox. Fox had been the first choice for the role but his filming schedule for "Family Ties" precluded him from taking the role. Five weeks into the shoot a deal was reached with "Family Ties" and the film was re-shot with Fox in the lead role.

In the 1990s, Stoltz appeared in a number of film, television, and stage plays including "Pulp Fiction," "Bodies, Rest and Motion," "Memphis Belle," "The Waterdance," "Little Women," "Killing Zoe," "Little Women," "2 Days in the Valley," and "Anaconda."

He has also played recurring roles on such television series as, "Chicago Hope," "Once and Again," "Mad About You," "Frasier," "Will and Grace," "The Triangle," "Close to Home," "Grey's Anatomy," and "Caprica."

In 2014, Stoltz was the producing director of "Madam Secretary." The following year he moved into the role of executive producer. He has directed more than 10 episodes of the series as well as appeared in it as Will Adams, the brother of Tea Leoni's character.

Personal Life: He dated Ally Sheedy for three years in college. They met in history class and lived together in a commune in Hollywood called the Harris Hollywood House.

Stoltz and Jennifer Jason Leigh dated from 1985 to 1989. They appeared in "Fast Times at Ridgemont High"  and "Sister, Sister" together.

In 2005, Stoltz and Bernadette Moley got married. She is a singer and songwriter. They have two children together.

He has German, English, and Scottish heritage.

He is a vegetarian.

He incorporates the tenets of Buddism in his life. Specifically, many of the principles of yoga, meditation and detachment of the religion have not only helped him in his professional life, but also in his personal life.

His sister Catherine is an opera singer. His sister Susan is a writer. 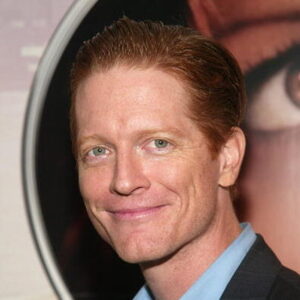