Eric Mabius Net Worth: Eric Mabius is an American actor who has a net worth of $3 million. Eric Mabius was born in Harrisburg, Pennsylvania in April 1971. He was voted "Most Dramatic Boy" as a senior in high school and studied film at Sarah Lawrence College in Bronxville, New York.

His first film role came in the 1995 independent movie Welcome to the Dollhouse. In television Eric starred as Jeff McCann in the series Eyes from 2005 to 2007. From 2004 to 2009 he had a recurring role as Tim Haspel in The L Word. One of his best known roles was as Daniel Meade in the series Ugly Betty from 2006 to 2010. In 2011 he starred as Julius Berger in the series Outcasts, and in 2014 as Oliver in the series Signed, Sealed, Delivered. Mabius starred as Greg McConnell in the movie Cruel Intentions in 1999. He starred as The Crow in 2000's The Crow: Salvation and as Matt in 2002's Resident Evil. In 2013 Mabius won a Golden Angel Award at the Chinese American Film Festival for Best Supporting Actor in Shen qi. He was nominated for Screen Actors Guild Awards in 2007 and 2008 for Ugly Betty. In the late 1980s he competed as a luger and was honorary captain of the United States luge team at the 2010 Winter Olympics. He also appeared in the 2008 pro-Obama music video "We Are the Ones". Eric married Ivy Sherman in 2006 and the couple has two children together. 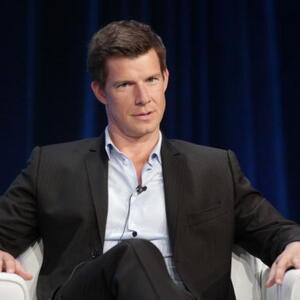