Being acquainted with the theater stage at the age of 10, young Chriqui started playing small parts mainly in Canadian productions in such TV series as Are You Afraid of the Dark? (Nickelodeon, 1992-96). Her consistency in portraying minor characters, like in Detroit Rock City (1999), eventually brought her larger roles in the romantic comedy On the Line (2001) and the slasher movie Wrong Turn (2003). Her fabled breakthrough came with her portrayal of Sloane on the hit series, Entourage (HBO, 2004-2011). Playing the tempestuous love interest of the show's resident good guy, Kevin Connelly, earned her enormous following and an entry to the pages of men's magazines like Stuff and Maxim, where she was often cited as one of Hollywood's most desirable women. Meanwhile, this black-raven actress could be seen in more feature film productions like Adam Sandler's comedy You Don't Mess with the Zohan (2008) and the R&B music industry biopic Cadillac Records (2008). As for her post-Entourage recurring roles on TV, they include the historical drama series The Borgias (Showtime, 2011- ) and animated sci-fi adventure TRON: Uprising (Disney XD, 2012- ). As versatile as she is beautiful, Chriqui has become one of film and TV's most desirable actresses. 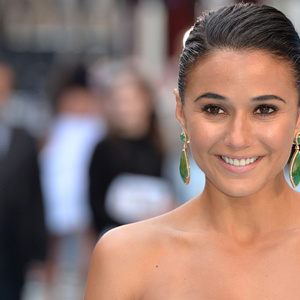