Emma Samms Net Worth: Emma Samms is an English actress who has a net worth of $10 million. Born in London, England, in 1960 as Emma Samuelson, Emma Samms wanted to be a ballet dancer and study the art until she was forced to quit after a hip injury when she was 15 years old.

Samms decided to pursue an acting career, and rose to fame as Holly Sutton Scorpio on the soap opera "General Hospital". She remained on the show until 1985 when her character died in a plane crash so Samms could leave for another show. She then appeared on "Dynasty" and soon after its spin-off series, "The Colbys". Samms acted on "Dynasty" until 1989 and then again in 1991 for "Dynasty: The Reunion". She attempted to break into feature films, but found her niche was in television acting. She appeared on "My Two Dads", "Holby City", "Doctors", and "Models Inc". In 1992, "General Hospital" brought Samms' character back from the dead, and she appeared on the show for another year, playing Holly and her lookalike half-sister, Pamela. Samms returned to "General Hospital" one last time for seven episodes in 2006. Though she had two offers to appear in the pages of "Playboy", Samms turned the magazine down both times. She is the founder of the Starlight Children's Foundation, which works with ill children and their families. She has been married several times, most recently to John Holloway from 1996 until 2003. She has two children with Holloway. 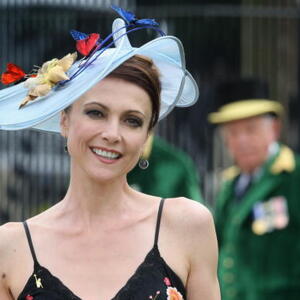