Emily Watson Net Worth: Emily Watson is an English actress who has a net worth of $10 million dollars. Emily Margaret Watson was born in Islington, London, England in January 1967. She joined the Royal Shakespeare Company in 1992. Her film debut came as Bess McNeill in 1996's Breaking the Waves.

For that role Emily was nominated for an Academy Award, Golden Globe, BAFTA Award, and many other awards. She was also nominated for an Academy Award for Best Actress for her role as Jacqueline du Pre in 1998's Hilary and Jackie. Other films Watson has starred in include The Boxer, Angela's Ashes, Gosford Park, Punch-Drunk Love, Red Dragon, The Life and Death of Peter Sellars, Within the Whirlwind, and The Book Thief. She won a BAFTA TV Award in 2012 for Best Leading Actress in Appropriate Adult. In 2002 Watson won a Screen Actors Guild Award for Outstanding Performance by the Cast of Theatrical Motion Picture for Gosford Park. Watson and her husband wrote the film Mood Indigo in 2007. She is also a thespian and was nominated for an Olivier Award for Uncle Vanya. Emily married Jack Waters in 1995 and the couple has two children. 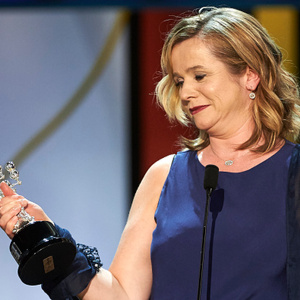