Emily Meade Net Worth: Emily Meade is an American actress who has a net worth of $1 million dollars. Meade was born in January 1989. When she was 17 years old she sang at the Italian song contest Zecchino d'Oro and won the prize for best non-Italian song. Her first role was in 2006 in the film The House is Burning.

She also appeared in the movies The Assassination, Back, Twelve, Burning Palms, My Soul to Take, Silver Tongues, Trespass, Young Adult, Sleepwalk with me, Adventures in the Sin Bin, Thanks for Sharing, Bluebird, Trooper, Gimme Shelter, That Awkward Moment, and Gabriel. Meade appeared in Law & Order, and had a recurring role in Boardwalk Empire and Law & Order: Special Victims Unit. She also appeared in the TV series Fringe and had a recurring role in The Leftovers as Aimee. Her upcoming projects include Charlie Trevor and a girl Savannah and Me Him Her. Emily won Best Actress at the Karlovy Vary International Film Festival in 2013. 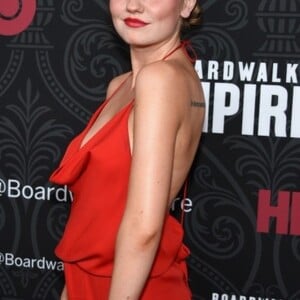