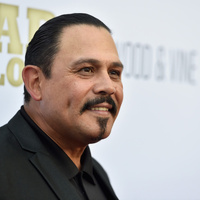 Emilio Rivera Net Worth: Emilio Rivera is an American actor who has a net worth of $5 million dollars. Born in 1961 in San Antonio, Texas, Emilio Rivera is the oldest of seven children and grew up in Los Angeles. He scored his first on-screen role with a part in Renegade starring Lorenzo Lamas in 1992. Rivera has worked consistently since then, going on to appear on episodes of Beverly Hills, 90210, JAG, The Bold and the Beautiful, Soldier of Fortune, Inc, Walker, Texas Ranger, NYPD Blue, The Shield, Bones, My Name is Earl, and Brothers & Sisters, before landing a recurring part as Marcus Alvarez on Sons of Anarchy. As of 2014, Rivera has appeared in 23 episodes of the show beginning in 2008. He also has an extensive film history with appearances in The Cable Guy, Bruce Almighty, Purple Heart, Fun with Dick and Jane, The Dead One, Spider-Man 3, Strange Wilderness, and Next Day Air.  Rivera has been in three music videos: Mobb Deep's "Got It Twisted" in 2004, 50 Cent's "Just a Lil Bit" in 2005, and Nicki Minaj featuring Lil Wayne's "High School" in 2013. Rivera is typically most recognized for his work portraying Mexican criminals on screen. He is married to his wife, Yadi Valerio, and has three children from a former relationship.