What is Ellie Kemper's Net Worth?

Ellie Kemper is an American actress, comedian, and writer who has a net worth of $9 million. Kemper is best known for playing Erin Hannon on the NBC sitcom "The Office" (2009–2013) and Kimmy Schmidt on the Netflix series "Unbreakable Kimmy Schmidt" (2015–2019).

Ellie Kemper was born Elizabeth Claire Kemper on May 2, 1980, in Kansas City, Missouri. She grew up in St. Louis with mother Dotty, father David, and three siblings. David is a member of one of Missouri's wealthiest families and served as the CEO and chairman of Commerce Bancshares. Ellie's great-great-grandfather is railroad magnate and banker William Thornton Kemper Sr., and the Mildred Lane Kemper Art Museum in St. Louis is named after her grandmother. Kemper's younger sister Carrie is an Emmy-nominated TV writer and producer who has worked on "The Office" and "Silicon Valley." Ellie attended Conway Elementary School and John Burroughs School, where future "Mad Men" star (and "Unbreakable Kimmy Schmidt" co-star) Jon Hamm was her acting teacher. After graduation, Ellie enrolled at Princeton University, and she earned a Bachelor of Arts degree in English in 2002. While attending Princeton, she joined the field hockey team as well as the school's improv group and touring musical-comedy troupe. Kemper also spent a year at Worcester College, Oxford, when she was studying toward a graduate degree in English Literature.

Ellie earned her Screen Actors Guild card after appearing in a 2006 Kmart commercial that involved a tarantula crawling across her face. Kemper interned at "Late Night with Conan O'Brien," as did her future "The Office" castmates Mindy Kaling, John Krasinski, and Angela Kinsey, and she appeared in sketches on the show in 2007 and 2008. Around that time, Ellie appeared in the TV movie "Redeeming Rainbow" (2007), the Comedy Central series "Important Things with Demetri Martin" (2009–2010), and the films "Cayman Went" (2009) and "Mystery Team" (2009). Kemper also worked with the People's Improv Theatre and Upright Citizens Brigade; at UCB, she performed with the improv teams fwand and Mailer Daemon, appeared in shows such as "Death and/or Despair" and "The Improvised Mystery," and put on the one-woman show "Dumb Girls," which she also wrote. Kemper auditioned for "Saturday Night Live" in 2008, and "Variety" named her one of "10 Comics To Watch" in 2009.

An audition for "Parks and Recreation" led co-creators Greg Daniels and Michael Schur to cast Ellie on their other series, "The Office." She began playing Erin Hannon during the show's fifth season and went on to appear in more than 100 episodes. She also appeared in "The Office" web series "Subtle Sexuality" (2009), "The Mentor" (2010), "The 3rd Floor" (2010), "The Podcast" (2011), and "The Girl Next Door" (2011). While appearing on "The Office," Kemper guest-starred on "NTSF:SD:SUV::" (2012) and "The Mindy Project" (2012–2013), and appeared in several films, including 2010's "Get Him to the Greek" and "Somewhere" and 2012's "21 Jump Street." She also co-starred with Kristen Wiig, Maya Rudolph, Rose Byrne, Wendi McLendon-Covey, and Melissa McCarthy in the blockbuster comedy "Bridesmaids," which grossed $288.4 million at the box office and earned a Golden Globe nomination for Best Motion Picture – Musical or Comedy. Ellie had an uncredited role in the Jason Bateman-Melissa McCarthy film "Identity Thief" (2013), and the following year, she appeared in the films "Laggies," "Sex Tape," and "They Came Together." 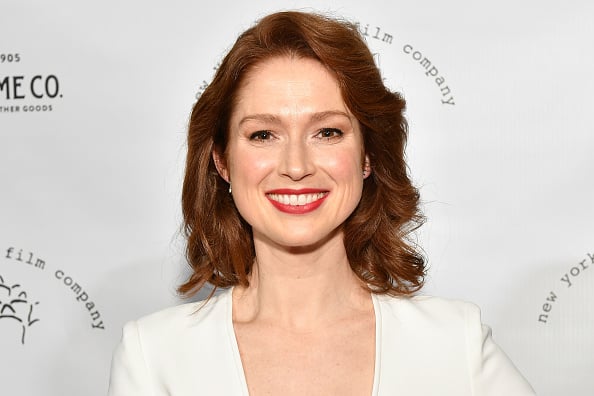 On July 7, 2012, Ellie married comedy writer Michael Koman, who has written for "Late Night with Conan O'Brien," "The Colbert Report," and "Saturday Night Live." They welcomed son James in July 2016 and gave him a little brother, Matthew, in September 2019. Though Koman is Jewish, the couple married in the Catholic Church and are raising their children Roman Catholic.

In 2016, Kemper and Koman paid $2.8 million for a pre-war co-op in the Upper West Side area of New York City. The home includes three bedrooms and three bathrooms and is just a few blocks away from Tina Fey's home. They listed this home for sale in April 2022 for $2.875 million.