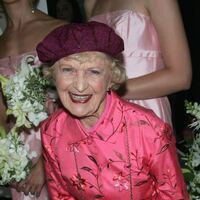 Ellen Dow net worth: Ellen Dow was an American actress and drama coach who had a net worth of $2 million. Ellen Dow was born in Mount Carmel, Pennsylvania in November 1913 and passed away in May 2015. She was perhaps best known as the rapping grannie Rosie in the movie The Wedding Singer. Dow had more than 100 acting credits to her name. From 2001 to 2002 she starred as Grandma Harriet Krupp on the television series Maybe It's Me. Ellen Dow appeared in several films including Ready to Rumble, Road Trip, Sister Act, 54, Patch Addams, and Wedding Crashers. She also appeared in episodes of the TV series The Twilight Zone, Mr. Belvedere, Beauty and the Beast, Moonlighting, Webster, The Golden Girls, The Wonder Years, Family Matters, ER, Seinfeld, Will & Grace, Scrubs, Six Feet Under, and Hannah Montana.  Ellen Dow passed away on May 4, 2015 at 101 years old from pneumonia.