Elizabeth McGovern Net Worth: Elizabeth McGovern is an American actress and musician who has a net worth of $4 million dollars. Elizabeth Lee McGovern was born in Evanston, Illinois in July 1961. She studied at the American Conservatory Theater and The Julian School. Her first role came in the TV series California Fever in 1979.

Her first film role came in 1980's Ordinary People. In 1981 McGovern played Evelyn Nesbit in Ragtime. She earned an Academy Award nomination for Best Supporting Actress. Elizabeth starred in the films Once Upon a Time In America, Johnny Handsome, and the Handmaid's Tale. She starred in the 2010 films Kick-Ass and Clash of the Titans. She has appeared in the TV shows Law & Order: Special Victims Unit, If Not for you, Tales from the Crypt, The Scarlet Pimpernel, The Brotherhood of Poland, New Hampshire, Three Moons Over Milford, and Freezing. Since 2010 she has starred as Cora Crawley on Downton Abbey. As a musician McGovern sang for the band Sadie and the Hotheads. The band has release an album. She has been nominated for two Golden Globes, two Screen Actors Guild Awards, and a Primetime Emmy Award. Elizabeth married Simon Curtis in 1992 and they have two children. She was previously engaged to actor Sean Penn. 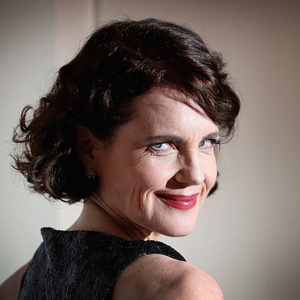