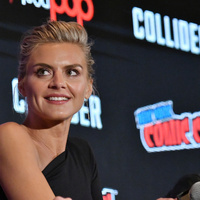 Eliza Coupe net worth: Eliza Coupe is an American actress who has a net worth of $3 million. She is best known for her role as Jane Kerkovich-Williams in the ABC Comedy, Happy Endings and as Denise "Jo" Mahoney in the final two seasons of Scrubs. She was born on April 6, 1981 in Plymouth, New Hampshire. Coupe graduated from the California Institute of the Arts, and after college studied Improve comedy at The Groundlings and ImprovOlympic. In 2005, her one-woman sketch, the Patriots, premiered at the Upright Citizens Brigade Theatre and won her the breakout performer award at HBO's US comedy Arts Festival in Aspen in 2006. She went on to appear in the short lived MTV series Short Circuitz, Flight of the Conchords, Unhitched, and was a series regular in HBO's unaired 12 Miles of Bad Road; she also had a recurring role in Samantha Who?. From 2011-2013, she appeared in Happy Endings and has recently signed on to play a recurring role in the third season of House of Lies; she also stars in the USA comedy series Benched, which was released in 2014. Coupe has lived with dyslexia and ADHD since childhood. She was married to acting teacher and puppeteer, Randall Whittinghill from December 2007-June 2013.