What was Elaine Stritch's Net Worth?

Elaine Stritch was an American actress and singer who had a net worth of $10 million at the time of her death. Elaine died on July 17, 2014 at the age of 89. Elaine Stritch was best known for her prolific work on Broadway and her roles in various films and television series. Over the course of her career, she earned Tony Award nominations for "Bus Stop," "Sail Away," "Company," and "A Delicate Balance," while her one-woman show "Elaine Stritch at Liberty" won the Tony for Best Special Theatrical Event. Among her other notable credits, Stritch starred on the British television sitcom "Two's Company" and had an Emmy-winning recurring role on "30 Rock."

Some of her classmates at the theater school included future acting legends Marlon Brando and Bea Arthur. She made her professional acting debut on stage in the mid-1940s, and then made her Broadway debut in the 1946 production of "Loco". She went on to appear in multiple Broadway and National touring productions, including "Call Me Madam", "Pal Joey", "Sail Away", and "Company".

She began her film and television career in the late 1940s, and went on to appear in such projects as "The Scarlet Hour", "A Farewell to Arms", "The Spiral Staircase", "Cadillac Man", "Screwed", "Autumn in New York", and "Monster-in-Law". She was nominated for multiple awards, including five Tony Awards. She won one for her one-woman show, "Elaine Stritch at Liberty". She has also been nominated for eight Emmy Awards, and has won three. To younger audiences, Elaine Stritch is probably most widely recognized for her Emmy-award winning recurring role as Jack Donaghy's mother Colleen on the NBC sitcom "30 Rock".

Elaine Stritch was born on February 2, 1925 in Detroit, Michigan as the youngest daughter of homemaker Mildred and B.F. Goodrich executive George. Her older sisters were Sally and Georgene. Stritch was of Irish descent on her father's side and Welsh heritage on her mother's side. For her higher education, she attended the New School's Dramatic Workshop in New York City, where she trained under Erwin Piscator.

In 1944, Stritch made her debut on stage in a production of "Bobino" at the New School. The next year, she appeared in "The Private Life of the Master Race" at the City College of New York. Stritch was subsequently in a Philadelphia production of "Woman Bites Dog" and a Connecticut production of "What Every Woman Knows."

Stritch made her Broadway debut in the 1946 play "Loco." She followed this with a major year in 1947: in addition to serving as a replacement for Jane Middleton in "Made in Heaven," she appeared in "Angel in the Wings," "The Shape of Things," "The Little Foxes," and "Three Indelicate Ladies." In 1950, Stritch understudied Ethel Merman in the Broadway production of "Call Me Madam"; she would later star in the show during its national tour. Stritch went on to appear in the Broadway revival of "Pal Joey" in 1952, and then a revival of "On Your Toes" in 1954. Following this, she appeared in the original Broadway production of the play "Bus Stop," for which she earned her first Tony Award nomination. In 1958, Stritch originated the leading role in the musical "Goldilocks." A few years later, she earned her second Tony Award nomination for her role in Noël Coward's musical "Sail Away."

In 1963, Stritch served as a replacement for Uta Hagen in Edward Albee's play "Who's Afraid of Virginia Woolf?" She next performed in tours of "I Married an Angel" and "The King and I," and then acted in a regional production of "The Grass Harp." In 1967, Stritch was in the musical "Wonderful Town," and in 1968 appeared in a revival of the play "Private Lives." She subsequently performed in both national and regional tours of the musical "Mame." In 1970, Stritch had one of her most famous roles in the original Broadway production of Stephen Sondheim's "Company," playing Joanne; after earning her third Tony nomination, she reprised the role on London's West End. Also in London, Stritch appeared in "Small Craft Warnings" and "The Gingerbread Lady." Following her return to the US in the 80s, she was in such shows as "Dancing in the End Zone," "Love Letters," and a revival of "Showboat." For her role in the 1996 Broadway revival of Edward Albee's "A Delicate Balance," Stritch was nominated for her fourth Tony. Her final stage role was from 2010 to 2011, serving as a replacement for Angela Lansbury in a Broadway revival of "A Little Night Music."

Stritch had one of her greatest and most acclaimed stage successes toward the end of her career, with her one-woman show "Elaine Stritch at Liberty." An encapsulation of her life and career, the show premiered in 2001 at New York's Public Theater before debuting on Broadway in 2002. It also played at London's Old Vic Theatre. The production went on to win the Tony Award for Best Special Theatrical Event. 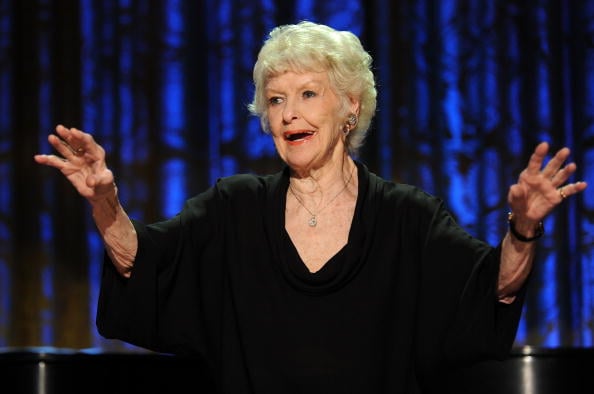 On the big screen, Stritch made her debut in the 1956 crime film "The Scarlet Hour." She next appeared in two 1957 films: the Western "Three Violent People" and Charles Vidor and Ben Hecht's adaptation of "A Farewell to Arms." In 1958, Stritch starred opposite Tony Curtis and Janet Leigh in the romantic comedy "The Perfect Furlough." Following her role in 1959's "Kiss Her Goodbye," Stritch didn't return to the big screen until 1965, when she played a lesbian bar proprietor in the crime thriller "Who Killed Teddy Bear?" Her subsequent credits were the crime drama "Too Many Thieves"; the comedy "The Sidelong Glances of a Pigeon Kicker"; the mystery thriller "The Spiral Staircase"; and Alain Resnais' "Providence."

After a ten-year hiatus from film, Stritch returned in 1987 to play a former movie star in Woody Allen's "September." Subsequently, she was part of the ensemble cast of the 1988 science-fiction sequel "Cocoon: The Return." In the 90s, Stritch appeared in "Cadillac Man," "Out to Sea," and "Krippendorf's Tribe." Kicking off the 2000s, she was in "Autumn in New York" and Woody Allen's "Small Time Crooks," and also had a rare starring role in the comedy "Screwed." Stritch's later credits include "Monster-in-Law," "Romance & Cigarettes," "ParaNorman," and "River of Fundament."

Stritch made her earliest television appearances on the sitcom "The Growing Paynes" in the late 40s and the "Goodyear Television Playhouse" in the early-to-mid 50s. Later, in 1960, she had a notable role on the CBS sitcom "My Sister Eileen." One of Stritch's biggest television roles came in 1975, when she began playing American expat writer Dorothy McNab on the British sitcom "Two's Company." She remained on the show through its conclusion in 1979. Following this, Stritch starred on another British series, "Nobody's Perfect." She continued to appear frequently on British television on such series as "Tales of the Unexpected" and "Jackanory."

Following her return to the US, Stritch appeared on the soap opera "The Edge of Night" and the short-lived sitcom "The Ellen Burstyn Show." She went on to have memorable recurring parts on "The Cosby Show," "Law & Order," and "Oz." For her recurring role as Colleen Donaghy on the NBC sitcom "30 Rock," Stritch won an Emmy Award in 2007.

In 1973, Stritch married actor and playwright John Bay; they remained together until Bay's passing from cancer in 1982. Following her husband's death, Stritch fell back into the alcoholism that had long plagued her life and career.

At her home in Birmingham, Michigan, Stritch passed away in her sleep in 2014. She was 89 years of age. 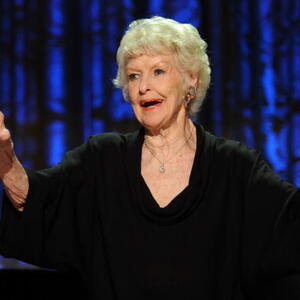