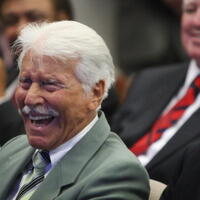 Efrem Zimbalist, Jr. Net Worth: Efrem Zimbalist, Jr. was an American actor who had a net worth of $5 million. Efrem Zimbalist, Jr was born in New York, New York in November 1918 and passed away in May 2014. He attended Yale University and worked as a page for NBC radio. Efrem served in the U.S. Army during World War II and was awarded with a Purple Heart for receiving a leg wound in the battle of Hurtgen Forest. He acted on Broadway and was a stage actor and producer. His opera The Consul won the Pulitzer Prize for music in 1950. He signed with Warner Brothers in 1956. Zimbalist starred in the television series 77 Sunset Strip and The F.B.I. He starred as Dandy Jim Buckley in Maverick was the voice of Alfred Pennyworth in Batman: The Animated Series. Efrem also voiced Dr. Octopus in the Spider-Man 1994 series and Justin Hammer in Iron Man 1994. Zimbalist won a Golden Globe Award in 1959 for Most Promising Newcomer – Male. He was nominated for two Primetime Emmy Awards and received a star on the Hollywood Walk of Fame in 1994. Efrem was married three times and had three children. Efrem Zimbalist, Jr. passed away on May 2, 2014 at the age of 95.