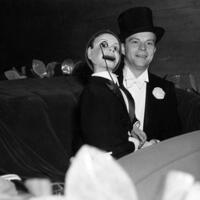 Edgar Bergen net worth: Edgar Bergen was an American actor, comedian, and radio performer who had a net worth of $2 million. Edgar Bergen was born in Decatur, Michigan in February 1903 and passed away in September 1978. Edgar is the father of actress Candice Bergen. He was well known for being a ventriloquist and his characters Mortimer Snerd and Charlie McCarthy. Bergen started his career in vaudeville. He starred in The Chase and Sanborn Hour from 1937 to 1956. Bergen later starred in The Charlie McCarthy Show and Edgar Bergen Hour. He was also a comic strip creator who created Mortimer & Charlie. He starred in the movies The Goldwyn Follies, Letter of Introduction, You Can't Cheat an Honest Man, Charlie McCarthy, Detective, Look Who's Laughing, Here We Go Again, Song of the Open Road, Fun & Fancy Free, I Remember Mama, Charlie's Haunt, One Way Wahine, Don't Make Waves, Rogue's Gallery, The Phynx, and Won Ton Ton: The Dog Who Saved Hollywood. Bergen won an Honorary Academy Award in 1938 for his outstanding comedy creation Charlie McCarthy. He won a Lifetime Achievement Award from the Screen Actors Guild in 1979 and has stars on the Hollywood Walk of Fame for Motion Picture, Television, and Radio. Edgar Bergen passed away of kidney disease on September 30, 1978 at the age of 75.