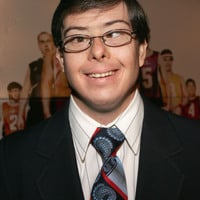 Eddie Barbanell net worth: Eddie Barbanell is an American actor who has a net worth of $500 thousand. Eddie Barbanell is based in Florida, and began focusing on his acting career in 2000. He studied with Jay Lynch of the Opus Theater and Selma Glass at the Coconut Creek Recreation Center, before moving on to work with Allan Press of the Youth Theater in Boca Raton, Florida. Eddie Barbanell, who has Down Syndrome, became known to wider audiences when he was cast in "The Ringer" opposite Johnny Knoxville in 2005. After stepping away from acting, he decided to return in 2010. Since then, he has appeared in the films "Jackass 3D" and "The Legend of Awesomest Maximus", as well as the television movie, "Down". Most recently, he has played guest-starring and recurring roles on "The New Normal" and "Workaholics". Beginning in the fall of 2013, he will be appearing on the new show, "Ridiculousness".