Dylan McDermott Net Worth and Salary: Dylan McDermott is an American actor who has a net worth of $20 million. He is a Golden Globe winner and Emmy nominee who has been active in film, television and theater.

Early Life: Mark Anthony McDermott, better known as Dylan McDermott, was born on October 26, 1961 in Waterbury, Connecticut. His parents were young teen parents; his mother Diane was only fifteen when he was born, and his father Richard was seventeen. By 1967, his parents had divorced, and McDermott and his mother lived with his maternal grandmother Avis Marino.

Tragedy struck his childhood when his mother Diane was shot and killed on February 9, 1967. Originally ruled as an accidental death, police later claimed to have discovered enough evidence to files murder charges against a man named John Sponza, who was living with Diane at the time. Sponza, who allegedly had ties to organized crime, was killed in 1972 when his body was found in a car trunk in Massachusetts. As such, McDermott and his sister were raised by their maternal grandmother Avis. He graduated from Holy Cross High School in Waterbury in 1979.

As a teenager, McDermott visited his biological father Richard in New York. Richard owned the West Fourth Street Saloon in Greenwich Village, so McDermott often spent his time working in the bar. As an awkward teenager, he began imitating his acting heroes Marlon Brando and Humphrey Bogart. His father's third wife, playwright Eve Ensler, legally adopted McDermott when he was 15 and she was 23. Although she has since divorced his father, she remains close with McDermott, and she was the one who initially encouraged him to pursue a career in acting. She supported him by writing roles for him into her plays. His took on the name "Dylan" after Ensler suffered a miscarriage, choosing to go by the name initially planned for her unborn child. With her encouragement, McDermott began attending acting school at Fordham University, and studying at the Neighborhood Playhouse School of the Theatre in New York City.

Acting Career: McDermott's screen debut was in the 1987 war film "Hamburger Hill." Other projects he worked on in the 1980s include "Steel Magnolias" (1989), starring opposite the actress Julia Roberts; "Twister" (1989); and "Neon Empire" (1989). His big break came in 1993 with the hit film "In the Line of Fire," for which McDermott received praise for his connection with Clint Eastwood.

"In the Line of Fire" helped McDermott gain greater recognition, and land a spot on the television series "The Practice." In the legal drama, he played the role of lawyer and law firm head Bobby Donnell, appearing on the show for eight seasons from 1997 to 2004. His role on the show launched him into the spotlight, and helping land him a spot on People's list of the "50 Most Beautiful People in the World" in both 1998 and 2000. Furthermore, his role as Bobby Donnell earned him a Golden Globe Award for Best Performance by an Actor in a Television Series – Drama, and a nomination for the Primetime Emmy Award for Outstanding Lead Actor in a Drama Series. However, despite his success, he was cut from the show due to "economic and creative realities" and pressure from ABC to reduce costs, according to show producer David E. Kelley, and did not appear in the final two episodes of the final season.

After leaving "The Practice," McDermott starred in the four-part mini-series "The Grid" opposite actress Julianna Margulies, playing an FBI Special Agent in an anti-terrorist unit. In 2006, he returned to his theater roots and appeared in Eve Ensler's play "The Treatment" as a returned soldier suffering from post-traumatic stress disorder. He subsequently went on to star in several television series, including "Big Shots" (2007-2008), which was cancelled due to low viewership and only had 11 episodes instead of the originally-planned 13, and TNT drama "Dark Blue" (2009-2010), playing a veteran cop in LAPD. Additionally, he starred in FX anthology series "American Horror Story," playing the role of psychologist and cheating husband Ben Harmon on season one, and Johnny Morgan on season two.

The year 2013 brought McDermott's appearance in three different films: "The Campaign," "The Perks of Being a Wallflower," and "Nobody Walks." He continued his streak of appearing in short-lived television series with the CBS shows "Hostages" (2013) as FBI agent Duncan Carlisle, and "Stalker" (2014) as Detective Jack Larsen.

Other Projects and Pursuits: McDermott launched his first photography exhibition, "The Dylan Project, Make Some Noise!" in Montreal Quebec, at Avenue Art Gallery. The exhibition was a collaboration with Art Agent, Marina Cutler, in support of The V-Day Organization, which supported women who have suffered violent acts of aggression. The exhibition was a way for McDermott to combine his support for the organization with his love of photography, and raise funds and awareness for a good cause.

Personal Life: McDermott married actress Shiva Rose on November 19, 1995. They have two daughters together, Colette and Charlotte. Reflecting McDermott's close relationship with playwright Eve Ensler, his daughter Colette's birth features prominently in Ensler's "The Vagina Monologues." People Magazine confirmed in September 2007 that McDormott and Rose had separated. McDermott filed for divorced in May 2008, and their it was finalized in January 2009. McDermott began dating his "Stalker" co-star Maggie Q after meeting on-set in early 2014, and they announced their engagement in January 2015. However, the couple split after a four-year engagement in February 2019. 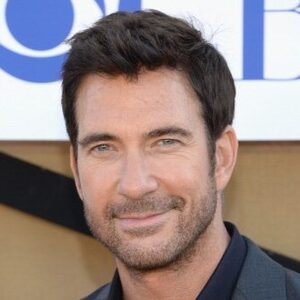