in Richest Celebrities › Actors
The Dudesons Net Worth:
$2 Million

The Dudesons Net Worth: The Dudesons are a Finnish stunt band made of four guys who have a net worth of $2 million dollars. The Dudesons, who all share a passion for skateboarding, snowboarding and downhill mountain biking, started performing stints in their homeland, Finland, in the 1990s. The members of the team, Jukka Hilden, Jarno "Jappi" Leppälä, JarnoLaasala, and Hannu-Pekka "HP" Parviainen, all come from the town of Seinäjoki, Finland and became best friends in elementary school.

The Dudesons or "four dudes from the Arctic Circle" as they call themselves, started filming themselves when Laasala got a video camera in the early 1990s. They would edit the videos and started selling VHS tapes when the pranks and stunts became more extreme. That's how they started to gain popularity in their town. In 2000, the crew started their own video production through their own production company: Rabbit Films. Episodes began to be aired in January 2001 becoming Seinäjoki´s most popular show. By September 2001, they have moved from their local television to the national Finish television. By the time they had shot four seasons of their show (2001-2004) they decide to go international by producing videos in English. The English show was first aired in Australia in February 2006. It debuted in US on SpikeTV in July 2006. The first season had been aired in 22 different countries by 2007 making it the most successful Finish TV show. It had been aired in over 150 countries by 2010. "The Dudesons in America", was obtained by MTV and airs since May 2010. A movie, called "The Dudesons Movie" opened in Finland in 2005 and then in USA in July 2006. The movie had a rather small success but won an award in Finland for "Audience´s Favorite Movie". 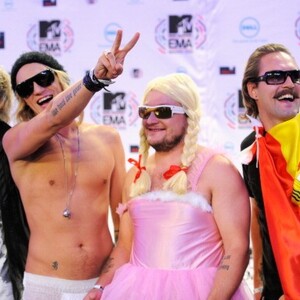