Doug Bradley net worth: Doug Bradley is an English actor who has a net worth of $5 million. Doug Bradley was born in Liverpool, England in September 1954. He is best known for starring as the Lead Cenobite Pinhead in the Hellraiser film series which includes the movies Hellraiser in 1987, Hellbound: Hellraiser II in 1988, Hellraiser III: Hell on Earth in 1992, Hellraiser IV: Bloodline in 1996, and four more straight to video versions. Bradley has also starred in other films including Nightbreed, Proteus, An Ideal Husband, Scream Park, and more. He has won awards for Hellraiser: Bloodline and On Edge and was nominated for a Fangoria Chainsaw Award for Best Actor for Hellraiser III: Hell on Earth in 1992. He is friend with novelist Clive Barker and wrote his own book titled Sacred Masks: Behind the Mask of the Horror Actor. Bradley also voiced the role of Sith Emperor for the video game Star Wars: The Old Republic. 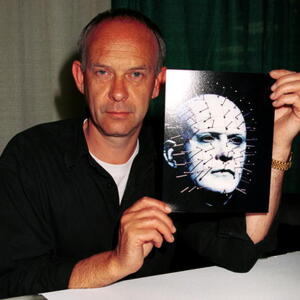