Donna Reed Net Worth: Donna Reed was an American actress and producer who had a net worth of $10 million. Donna Reed was born in Denison, Iowa in January 1921 and passed away in January 1986. Reed's career lasted over 40 years and she also appeared in more than 40 films. Her debut film roles came in the 1941 movies The Getaway, Shadow of the Thin Man, and Babes on Broadway.

She starred on television in The Donna Reed Show from 1958 to 1966. Reed also starred as Miss Ellie Ewing in the TV series Dallas from 1984 to 1985. She starred as Mary Hatch in the 1946 film It's a Wonderful Life and won an Academy Award for Best Supporting Actress as Lorene Burke in the 1953 film From here to Eternity. Reed won a Golden Globe Award for Best TV Star in 1963. She took over for Barbara Bel Geddes playing Miss Ellie Ewing on Dallas and then sued the production company after she was fired when Geddes decided to return to the program. She settled out of court and received over $1 million. Reed received a star on the Hollywood Walk of Fame in 1960 at 1612 Vine Street. Donna Reed passed away on January 14, 1986 at 64 years old from pancreatic cancer. 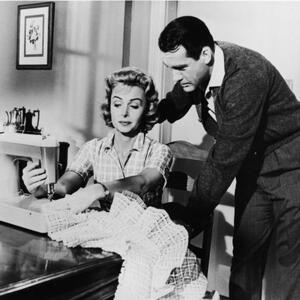