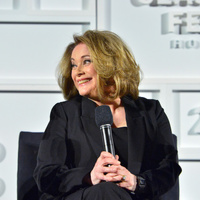 Donna Pescow net worth: Donna Pescow is an American actress and director who has a net worth of $3 million. Donna Pescow was born in Brooklyn, New York in March 1954. As an actress she starred as Angie Falco Benson on the television series Angie from 1979 to 1980. Pescow starred as Donna Garland on the TV series Out of This World from 1987 to 1991. From 2000 to 2003 she starred as Eileen Stevens on the series Even Stevens. Donna Pescow appeared in the movie Saturday Night Fever starring as Annette in 1977. She has directed episodes of the TV series Harry and the Hendersons, Even Stevens, and That's So Raven and appeared in episodes of the TV series General Hospital, One Life to Live, Trapper John, M.D., All My Children, Fantasy Island, Mr. Belvedere, Murder, She Wrote, The Love Boat, NYPD Blue, The Sopranos, The Flash, and more. Pescow has been nominated for a Golden Globe Award and three Daytime Emmy Awards.