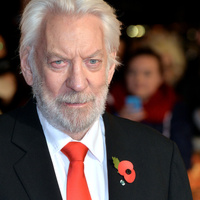 Donald Sutherland Net Worth: Donald Sutherland is a Canadian actor who has a net worth of $60 million. Sutherland has garnered widespread critical acclaim throughout his decades-long career, and he has been called one of the greatest actors without an Academy Award nomination to his name. He has been equally prolific in both film and television projects. Sutherland is also known for being the father of Kiefer Sutherland, Rossif Sutherland, and Angus Sutherland, all of whom have become successful in the film industry to some extent.

Early Life: Donald McNichol Sutherland was born on July 17th of 1935 in Saint John, New Brunswick. Raised in a family with British roots, Donald suffered from a range of health issues as a small child, including rheumatic fever, hepatitis, and polio. He spent his teen years in Bridgewater before gaining his first job as a news correspondent at the age of 14.

After graduating from high school, Sutherland attended Victoria University in Toronto. During his university years, Donald met his future wife and obtained a double major in engineering and drama. Even after graduating from university, Donald still wasn't quite sure whether he wanted to become an engineer or an actor. Eventually, he settled on the latter and left for England in 1957. He then enrolled at the London Academy of Music and Dramatic Art. After graduating from this institution, Sutherland then spent over a year performing at the Perth Repertory Theatre in Scotland.

Career: Donald's career began relatively slowly in the mid-60s, and he took various small roles in British television series. His first feature film came in 1964 with "Castle of the Living Dead." In 1965, he followed up with a role in "The Bedford Incident" before appearing in TV series such as "Gideon's Way" and "The Saint."

A big break for Sutherland came in 1967 when he was cast in the classic war film "The Dirty Dozen." Donald joined a star-studded cast that included Lee Marvin and Charles Bronson, and the film became a commercial success. This success prompted Sutherland to leave London in order to pursue a career in the United States.

Upon becoming established in Hollywood, Donald starred in films like "Start the Revolution Without Me," "Klute," and "Steelyard Blues." In the 70s, Donald started to make a name for himself as a leading man in films like "Don't Look Now," "The Eagle Has Landed," and "Eye of the Needle." He then appeared in the film "The Invasion of the Body Snatchers" alongside Jeff Goldblum in 1978.

During this period, Donald was also making a name for himself in the world of television, and he helped to laugh the Canadian series "Witness to Yesterday." To wrap up a busy 1978, Sutherland appeared in "National Lampoon's Animal House" as a marijuana-smoking professor. In 1980, Donald appeared in the critically-acclaimed film "Ordinary People."

During the next few years, Sutherland continued to appear in a range of notable films, including "A Dry White Season," "Lock Up," "Backdraft," and "Six Degrees of Separation." One of his most notable films of the 90s was "JFK," in which he played a mysterious intelligence officer. In 1992, he appeared in the film "Buffy the Vampire Slayer" before following up in 1994 with a prominent role in "Disclosure." He then appeared alongside his son Kiefer in the film "A Time to Kill."

During the 2000s, Sutherland appeared in films like "Cold Mountain," "The Italian Job," "Commander in Chief," "Pride & Prejudice," and "Fool' Gold." In 2012, Sutherland played the role of President Snow in the first film of "The Hunger Games" franchise. He later reprised this role in four of the film's sequels and gained widespread recognition from a mainstream audience.

Relationships: Donald's first wife was Lois Hardwick (not the child actor), and they were married in 1959. After separating from Hardwick in 1966, Sutherland married Shirley Douglas, the daughter of a prominent Canadian politician. The pair twins together before separating in 1970. His third and current wife is Francine Racette, a French Canadian actress whom Donald married in 1972. They subsequently had three sons together. Sutherland has named all of his four sons after directors. For example, Kiefer is named after Warren Kiefer, who directed Sutherland's first film "Castle of the Living Dead" under the pseudonym Lorenzo Sabatini.

Donald was a family friend of Animal House director/producer John Landis. The film's studio (Universal) insisted that Landis hire a well-known actor for the movie. The studio authorized Landis to offer Sutherland 2.5% of the movie's profits plus a salary of $35,000. Sutherland, who thought this movie had no chance of ever making a single dollar, politely declined. Universal then upped the offer to $35,000 plus 15% of the film's gross earnings – that's gross earnings, not net earnings. In other words, 15% of whatever the movie made at the box office, BEFORE costs were subtracted. Again, Sutherland politely declined.

Donald insisted on an up-front cash payment if he was going to accept the role. When the negotiations were over, Universal and Donald settled on a one-time, up-front payment of $50,000 with no gross points at all. He worked on the movie for two days. Animal House went on to gross $141 million at the box office and on home video. As you might have guessed, Sutherland's financial decision was a massive mistake. If he had only accepted the 15% stake, he would have earned $20 million – and that's not even taken inflation into account. Remember, $20 million in 1972 is the equivalent of about $122 million in today's money.