What is Donald Glover's Net Worth?

Donald Glover is an American actor, comedian, writer, producer, director, musician and DJ who has a net worth of $40 million. As a musician Donald Glover performs music under the stage name Childish Gambino, and as a DJ under the name mcDJ. From 2009 to 2014 he starred in 89 episodes of "Community." In 2016 he created, produced, wrote and starred in the series "Atlanta," which ran through 2022.

Donald McKinley Glover Jr. was born at Edwards Air Force Base, California, on September 25, 1983. His father Donald Sr. was a postal worker stationed at the base, and his mother Beverly previously worked as a daycare provider. He was raised in Stone Mountain, Georgia, along with this two siblings. His parents also served as foster parents for 14 years.

He attended Lakeside High School and DeKalb School of the Arts, before continuing his education at New York University's Tisch School of the Arts. He graduated from college in 2006 with a degree in Dramatic Writing.

Glover's writing samples, which included a spec script he had written for "The Simpsons," caught the attention of producer David Miner in 2006. Miner and Tina Fey were impressed by his writing, and hired him as a writer for the NBC sitcom "30 Rock." During his time writing for "30 Rock" between 2006 to 2009, he made occasional cameo appearances on the show. In 2008, the "30 Rock" writing team earned the Writers Guild of America Award for Best Comedy Series for the show's third season.

After a failed audition to play President Obama on "Saturday Night Live," Glover landed the role of former high school jock Troy Barnes on the NBC sitcom "Community." He starred in seasons 1 – 4 of the series, and was a partial member on the 5th season, appearing in only 5 episodes. In 2013, Glover signed a deal with FX to create a music-themed show, titled "Atlanta." Glover stars in, writes, occasionally directs, and works as an executive producer on the show. The show premiered in March 2015 to critical acclaim. It has won two Golden Globe Awards and two Primetime Emmy Awards. In particular, it is worthwhile to note that Glover's Emmy that he won for Outstanding Directing for a Comedy Series was the first ever to be awarded to an African-American in the award's history. The second season of "Atlanta" aired in 2018, and it has since been renewed for a third and fourth season, set to premiere in January 2021 and late 2021, respectively. In 2015, Glover also appeared in three films, "The Lazarus Effect," "Magic Mike XXL" and "The Martian."

In 2018 Glover portrayed a young Lando Calrissian in "Solo: A Star Wars Story." That same year, he proposed a project to New Regency that he wanted to work on. Despite not even having a script, they accepted his proposal, and Amazon Studios agreed to distribute the resulting film. The project resulted in the film "Guava Island" (2019), which was written by Glover's brother Stephen, starred Glover, and was directed by longtime collaborator Hiro Murai. In 2019, he also featured as the voice for adult Simba in the animated remake of "The Lion King." 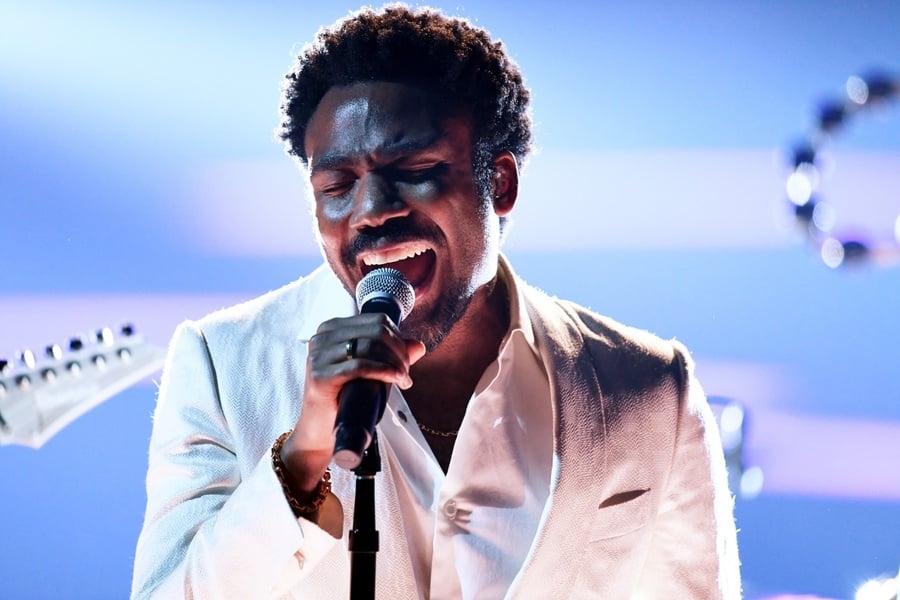 While working as a writer on "30 Rock," Glover released the independent mixtape "Sick Boi" in June 2008 under the stage name Childish Gambino. His second mixtape "Poindexter" was released in September 2009, followed by "I Am Just a Rapper," "I Am Just A Rapper 2" and "Culdesac" in 2010. His first extended play "EP" was released in March 2011 as a free digital download. In April that year, he embarked on his nationwide IAMDONALD tour, which consisted of rap, comedy and video performance segments.

As he worked on his debut album, Glover approached the "Community" score composer, Ludwig Göransson, to assist him with production. Prior to the album's release, Glover signed a record deal with Glassnote Records. He also went on The Sign-Up Tour during this time. His debut studio album "Camp" was released in November 2011, and debuted as No. 11 on the Billboard 200. The debut singles "Bonfire" and "Heartbeat" off the album peaked at No. 18 on the Bubbling Under Hot 100 Single chart and No. 54 on the Hot R&B/Hip-Hop Song chart, respectively.

Glover's second studio album "Because the Internet" was released in December 2013, and debuted at No. 7 on the Billboard 200 chart. To support the album's release, Glover also released a 72-page screenplay and a short him he wrote and starred in, "Clapping for the Wrong Reasons," which was directed by Hiro Murai. "Because the Internet" was nominated for Best Rap Album at the 57th Annual Grammy Awards, and the single "3005" was nominated for Best Rap Performance. "Awaken, My Love!" is Glovers third album, released in December 2016. It was also positively received by critics and nominated for two categories at the 2018 Grammy Awards. "Redbone," one of the singles off the album, also received multiple Grammy nominations and won Best Traditional R&B Performance.

After signing with RCA Records in January 2018, Glover released the single "This is America" in May. The song is famous for its lyrics that address topics like gun violence and racial tensions in the United States, and featured a very controversial music video directed by Hiro Murai. The song won Song of the Year, Best Music Video, Best Rap/Sung Performance and Record of the Year at the 2019 Grammy Awards. Glover's fourth album "3.15.20." was released in March 2020.

Glover has supported several brands throughout his career. He featured in the 2010 holiday advertising campaign for Gap. In partnership with Adidas, Glover reimagined three pairs of classic Adidas sneakers and released them in April 2019 as the "Donald Glover Presents" line.

Between September 2018 and September 2019, Donald Glover earned more than $30 million from his various entertainment endeavors. That was actually enough to make him one of the highest paid entertainers in the world during the period.

Donald Glover is notoriously private about his personal life. He shares two sons, born in 2016 and 2018, with partner Michelle White.