Donald Gibb net worth: Donald Gibb is an American actor who has a net worth of $4 million dollars. Donald Gibb was born in New York, New York and grew up in Sherman Oaks, California. An excellent athlete with a height of 6'4″, Donald Gibb went on to attend the University of New Mexico on a basketball scholarship.

He subsequently transferred to the University of San Diego to play football, even though he was accepted to the school with a basketball scholarship. After graduating, he played for the San Diego Chargers briefly, before shifting his focus to film and television work. He began his professional on-camera career in the early 80s, appearing in small roles in such projects as "Any Which Way You Can", "Stripes", and "Conan the Barbarian". By the mid-80s, he was playing guest starring roles on multiple shows, and began adding film credits to his resume. He is most widely recognized for his work as Fred "Ogre" Palowakski in the "Revenge of the Nerds" film franchise, and as Leslie "Dr. Death" Crunchner on "1st and Ten". More recently, Donald Gibb is famous for appearing as a barbarian in a series of humorous commercials for the credit card company Capital One. He also co-owns a bar in Chicago called Trader Todd's. He is the spokesman for the bar and markets a brand of beer which is, appropriately, called Ogre. 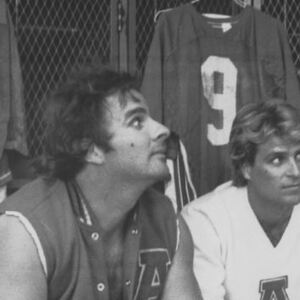