Donald Faison Net Worth: Donald Faison is an American actor, comedian, and voice actor who has a net worth of $12 million. Faison is probably best known for his leading role as Dr. Chris Turk in the hit comedy series "Scrubs." He starred in this show from 2001 to 2010. Outside of his television work, Faison has appeared in a wide range of films over the years. In addition, Donald is an accomplished voice actor with a number of credits to his name. In 2020, Faison collaborated with "Scrubs" co-star Zach Braff to create the podcast "Fake Doctors, Real Friends."

Early Life: Donald Adeosun Faison was born on June 22nd of 1974 in Harlem, New York City. He enjoyed an early connection to the entertainment industry, as his mother worked as a talent agent. His brother Olamaide Faison eventually pursued a successful music career. His middle name means "crown of the river of life" in the Yoruba language. During his youth, Donald became involved in the National Black Theater, located in Harlem. He also went to the Professional Children's School in Manhattan, where he attended classes alongside future actor Dash Mihok.

Career: One of Faison's first roles was in a commercial for Folgers coffee, circa 1991. At the beginning of his acting career, Donald booked relatively minor roles in movies like "Sugar Hill" and "Juice." His real breakthrough came in 1995 when he booked a much more central role in the movie "Clueless." He reprised his role on the subsequent TV spin-off, which aired from 1996 to 1999. Throughout the next few years, Donald appeared in films like "Butter," "Can't Hardly Wait," "Trippin'," and "Remember the Titans." During this perior he also booked roles on TV series like "Sabrina, the Teenage Witch," "Sister, Sister," and "Felicity."

Another major step forward for Faison came in 2001, when he booked a lead role in the series "Scrubs." This role made him one of the most famous actors on television, and he was honored with a number of award nominations as a result. Further film roles came with "Double Whammy," "Josie and the Pussycats," "Big Fat Liar," "Uptown Girls," "King's Ransom," "Something New," "Bachelor Party Vegas," and "Homie Spumoni."

Over the next few years, Faison also continued his voice acting career with roles in animated series like "Robot Chicken," "Kim Possible," "The Boondocks," "Clone High," "American Dad!," and many others. In 2010, he joined the cast of the science-fiction thriller "Skyline." Throughout the 2010s, Donald hosted "Who Gets the Last Laugh" and appeared in the game show "Winsanity."

In 2013, Faison joined the cast of "Kick-Ass 2," playing the character Doctor Gravity. In 2018, Donald also appeared in "Game Over, Man!" Over the next few years, he made cameo appearances in movies like "Pitch Perfect" and joined the cast of "Star Wars Resistance."

The creator of "Resistance" initially discovered Faison after watching an episode of "Robot Chicken." In this series, Faison is known for playing a character known as "Black Stormtrooper." Donald actually interned with Robot Chicken and learned how to produce stop-motion films. He subsequently started making his own stop motion videos on his YouTube channel. In honor of Faison, the producers of "Star Wars: Resistance" named his character "Hype Fazon."

In 2011, Donald landed a recurring role in "The Exes," playing the character of Phil Chase from 2011 to 2015. This became another notable step forward for Faison's career, and he was nominated for a number of awards as a result. Over the next few years, he continued his voice acting career with roles in series like "Supermansion." In 2019, he landed a main role in the mystery series "Emergence."

In 2020, he and Zach Braff started the podcast "Fake Doctors, Real Friends." During the podcast, the pair chat about real-life experiences that they had behind the scenes on the set of "Scrubs." Braff and Faison are extremely good friends in real life. They have stated that their podcast helped a lot of people get through the pandemic.

Scrubs Salary: According to court documents filed by a talent agency, Donald Faison earned over $1 million for the final season of "Scrubs." The talent agency brought a lawsuit against Faison, claiming that the actor owed them unpaid commission. The agency also claimed that they had negotiated a per-episode salary of about $75,000 for Faison. After hearing about the lawsuit, Faison reportedly paid his debt. This lawsuit was handled without much controversy, although the court documents revealed Donald's salary to the public.

Relationships: Donald began a relationship with Lisa Askey in 1997, and they eventually got married in 2001. After this marriage ended in 2005, Faison started dating CaCee Cobb. In 2012, they were married. CaCee first became famous as Jessica Simpson's personal assistant who appeared on the singer's reality TV show.

Over the course of these two marriages and prior relationships, Donald has had six children. His first child was born in 1997 to an ex-girlfriend, and he later had twins in 1999. In 2001 he welcomed another child into the world with his first wife, and he has had two children with his second wife.

Real Estate: In 2015, Donald Faison sold his home in Hollywood Hills for $1.8 million. The Mediterranean-style home was originally built in 1994, and it featured over 4,700 square feet of living space. Donald had originally listed the home earlier, with an asking price of $2.395 million before he settled for a significantly lower final selling price. According to records, Faison originally purchased the home in 2005 for $1.805 million. This means that he actually lost money on the real estate deal. 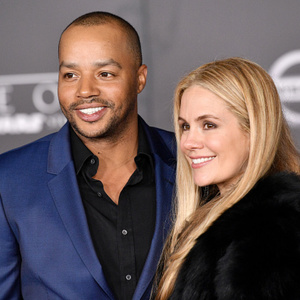