Domhnall Gleeson Net Worth: Domhnall Gleeson is an Irish actor who has a net worth of $7 million. Gleeson was born in May of 1983 in Dublin, Ireland. Gleeson has worked as a writer, director, and actor. He attended Malahide Community school before graduating from the Dublin Institute of Technology with a Bachelor in Media Arts.

Gleeson began writing for both film and the stage upon graduation. He starred in the feature film Studs in 2006. The film included an appearance from his father. He appeared in the Broadway theatre show The Lieutenant of Inishmore and received a Tony Award nomination for the role at age 23. Gleeson appeared in productions of American Buffalo and an adaptation of Great Expectations at the Gate Theatre in Dublin during 2007. In 2010, he broke out with his role as Bill Weasley in the Harry Potter and the Deathly Hallows iterations. Then he appeared in the Academy Award-nominated Coen Brothers' remake of the film True Grit. Gleeson won the 2011 Ifta Award for Best Actor for his role as Bob Geldof in the biopic When Harvey Met Bob. In 2015 Gleeson appeared in J.J. Abrams' Star Wars: The Force Awakens. In December 2017 he appeared in Star Wars: The Last Jedi. 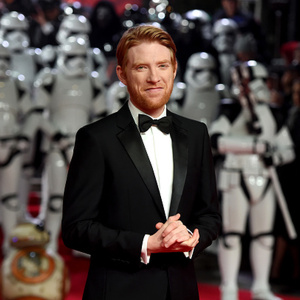