What is Djimon Hounsou's Net Worth and Salary?

Djimon Hounsouuu is an Oscar-nominated Beninese-American actor and model who has a net worth of $8 million. He is best known for his appearances in the films "Amistad" (1997), "Gladiator" (2000), "In America" (2003), "Blood Diamond" (2006), and "Furious 7" (2015). He is also known for playing the character Korath the Pursuer in the Marvel Cinematic Universe.

Djimon Gaston Hounsou was born in Cotonou, the Republic of Dahomey (now known as Benin), on April 24, 1964. His parents are Albertine and Pierre Hounsou. The Republic of Dahomey was a former French colony, attaining full independence from France in August 1960. Then, in 1975, it was renamed Benin. When he was twelve years old, Hounsou emigrated with his brother, Edmond, to Lyon, France.

Shortly after moving to France, Hounsou dropped out of school. He experienced hardships, including being temporarily homeless, but after a chance encounter with fashion designer Thierry Mugler, Hounsou became a model. He had decided to pursue modeling at the urging of Mugler. Hounsou began his modeling career in Paris in 1987, and three years later, moved to the United States.

Hounsou started his acting career with appearances in music videos. From 1989 to 1991, he appeared in several music videos for popular high-profile recording artists, including Paula Abdul for the song "Straight Up", Madonna for the song "Express Yourself", and Janet Jackson for the song "Love Will Never Do (Without You)".

In 1990, Hounsou made the successful transition to film, and made his film debut in "Without You I'm Nothing", directed by Sandra Bernhard. Throughout the 1990s, he continued to appear in various projects, including the films "Stargate" (1994), "and television series like "Beverly Hills, 90210" (1990) and "ER" (1999). In 1997, Hounsou gained even more prominence and recognition after be appeared as the character Cinqué in the film "Amistad", directed by Steven Spielberg.

Hounsou's career continued to grow, with roles in prominent and popular films like "Gladiator" (2000), "In America" (2004), "The Island" (2005), and "Blood Diamond" (2006). For his performance in "In America", he was actually nominated for the Academy Award for Best Supporting Actor. This was an amazing achievement—he is the fourth African male in history to be nominated for an Oscar. "Blood Diamond" landed him another Academy Award nomination, as well as nominations for the screen Actors Guild Award and Broadcast Film Critics Association. Additionally, he actually won an award for "Blood Diamond"—he received the National Board of Review Award for Best Supporting Actor.

Hounsou has enjoyed roles in several popular film franchises. He plays a villain, Nigerian-French mercenary Mose Jakande—in the seventh installment of the "Fast and the Furious" franchise, "Furious 7" (2015). In the Marvel Cinematic Universe, Hounsou portrays Korath the Pursuer. He has appeared as Korath in the Marvel films "Guardians of the Galaxy" (2014), "Captain Marvel" (2019). In another comic universe, the DC Extended Universe, he has appeared in the film "Aquaman" (2018) as the Fisherman King Ricou, and in the film "Shazam!" (2019) as the Wizard Shazam.

In addition to his on-screen acting roles, Hounsou has also worked as a voice actor. In 2000, he appeared in the animated children's show "The Wild Thornberrys" in the episode "Luck Be an Aye-Aye". In 2010, he voiced the character of T'Challa / Black Panther in the animated television series "Black Panther". In 2014, he voiced the character Drago Bludvist in the DreamWorks animated film "How to Train Your Dragon 2".

Even after his acting career took off, Hounsou would still model on occasion. In February 2007, Calvin Klein announced that Hounsou would be the new underwear model for the brand. He was being represented by Omar Albertto, famed Los Angeles modeling agent, at the time. He was featured in 2010 in a series of commercials on ESPN for the 2010 FIFA World Cup. Hounsou has also engaged in activism; in September 2009, he was a speaker at the United Nations Summit on Climate Change.

Hounsou started dating model and fashion designer Kimora Lee Simmons in 2007. They have one son together, a son named Kenzo Lee Hounsou, who was born in 2009. Hounsou and Simmons were together until November 2012, when they announced their separation. They had never gotten legally married in the United States, but had participated in a traditional commitment ceremony with his family in his home country of Benin back in 2008.

In January 2020, Djimon bought a house in LA's Westchester neighborhood for $2.1 million. 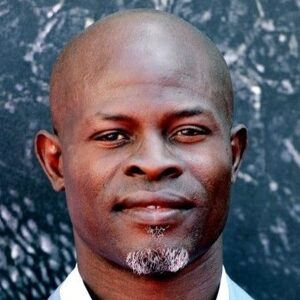