What is Dita Von Teese's Net Worth?

Dita Von Teese is an American burlesque dancer, pin-up model, costume designer, entrepreneur and actress who has a net worth of $16 million. She is arguably the most famous modern burlesque performer and is referred to today as the Queen of Burlesque. Today Dita presides over a mini-empire that includes her own fragrance line, lingerie collection, a line of signature cocktails and several best-selling books.

Dita Von Teese is credited with revitalizing the art of burlesque performance. Among her many positions, she served as a spokesperson for MAC Cosmetics, was a global ambassador for Cointreau, and was the face of Perrier. Von Teese has also appeared on a number of television programs, such as "CSI: Crime Scene Investigation," "The Masked Dancer," and "RuPaul's Drag Race."

She took the name "Dita" as a tribute to actress Dita Parlo. When she landed on the cover of Playboy in 2002 she decided to adopt the last name "Von Treese" after seeing it randomly in a phone book. It was subsequently misspelled as "Von Teese", and that stuck. She would go on to make dozens of appearances in Playboy and other magazines.

Dita Von Teese was born as Heather Renée Sweet on September 28, 1972 in Rochester, Michigan  to a machinist father and a manicurist mother. She is of Scottish, English, German, and Armenian descent. From a young age, Von Teese was fascinated by 1940s Hollywood cinema, and dressed up in vintage clothes purchased by her mother. She also received classical training in ballet, and danced for a local company at the age of 13. When her father landed a new job, Von Teese moved with her family to California; there, she went to University High School in Irvine.

At the age of 15, Von Teese worked as a salesgirl in a lingerie store, fostering her love of basques, corsets, stockings, and other articles. She had her career breakthrough at the age of 30, when she posed for the December 2002 Playboy cover. Von Teese soon became known for her trademark painted eye, crimson lipstick, dark bluish hair, and tattooed beauty mark on her cheek. She chose the name "Dita" in homage to silent film actress Dita Parlo.

Von Teese has graced the covers of several fetish magazines, such as Marquis and Bizarre, and was also on the cover of Midori's book "The Seductive Art of Japanese Bondage." In 2005, she appeared in collection advertisements for Vivienne Westwood. Later, in 2008, Von Teese was the cover model for the album "Werk 80 II" by German metal band Atrocity. As a fashion model, she has appeared in international issues of virtually every fashion magazine in the world.

Beyond her photographed appearances, Von Teese has been prolific on the catwalk. In 2004, she modeled for the fashion label Heatherette at Los Angeles Fashion Week, and in 2005 was in the autumn/winter ready-to-wear show for designer Giambattista Valli. Over the subsequent years, Von Teese walked the runway at Milan Fashion Week and Paris Fashion Week.

Renowned for bringing burlesque performance back into style, Von Teese is recognized for her elaborate shows inspired by 1930s and 40s musicals and movies. She involves many characters and props, with the latter often including a carousel horse, filigree heart, and a clawfoot bathtub. Von Teese also earned fame for her feather fan dance using the largest feather fans on the planet. 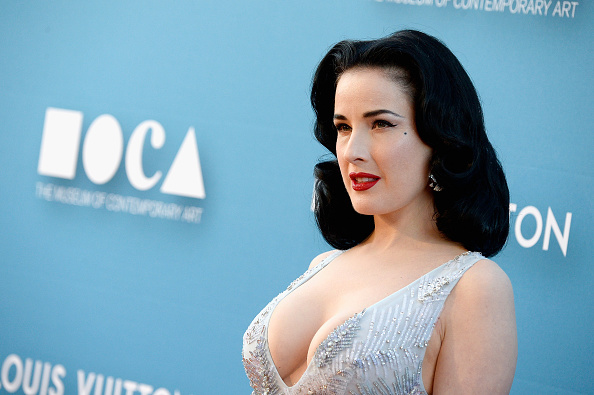 Early on in her career, Von Teese appeared in pornography, with her credits including "Romancing Sara," "Matter of Trust," "Pin Ups 2," "Decadence," and "Bound in Stockings." She made the transition to more mainstream work in 2005 with the short film "The Death of Salvador Dali," in which she portrayed Gala Dalí. Two years after that, Von Teese starred in the film "Saint Francis."

On television, Von Teese has made guest appearances on a number of reality shows, such as "America's Next Top Model," "RuPaul's Drag Race," "Top Chef Masters," "Project Runway," and "Hell's Kitchen." She also acted in a 2011 episode of "CSI: Crime Scene Investigation" and in three episodes of the Netflix sitcom "The Curious Creations of Christine McConnell." In 2021, Von Teese was a competitor on the British version of "The Masked Dancer."

Von Teese designed a range of lingerie for Wonderbra. She also launched a makeup collection called Classics, which included compact powder, eye shadow, mascara, and other items to create a retro burlesque look. Among her other endeavors, Von Teese created a clothing and underwear line called Von Follies, and created her own fragrances under the names Dita Von Teese, Rouge, FleurTeese, and Erotique. In 2014, she started working with the Australian department store Myer on another lingerie line.

Beyond television and film, Von Teese has been in many music videos. She has appeared in the videos for Green Day's "Redundant"; Marilyn Manson's "mOBSCENE" and "(s)AINT"; Thirty Seconds to Mars' "Up in the Air"; and Die Antwoord's "Ugly Boy" and "Gucci Coochie." Von Teese has also been in three videos for the electronic music duo Monarchy: "Disintegration," "Black Widow," and "Girls & Boys," the latter a cover of the Blur song.

In 2005, Von Teese married singer Marilyn Manson, who had been a longtime fan of hers. He proposed with a 7-carat, 1930s European round-cut diamond ring. One year later, Von Teese filed for divorce from Manson on account of irreconcilable differences. Following this, she dated French Count Louis-Marie de Castelbajac from 2009 to 2012. In the latter year, Von Teese had a short relationship with singer Theo Hutchcraft. Since 2014, she has been dating graphic designer Adam Rajcevich. Von Teese lives in a Tudor revival home in the Hollywood Hills that includes antique taxidermy and a glass box containing the vintage fetish shoes of model Bettie Page.

In 2015 Dita paid $2.8 million for a home in LA's Los Feliz neighborhood. She gave Architectural Digest a tour of the home in 2020: 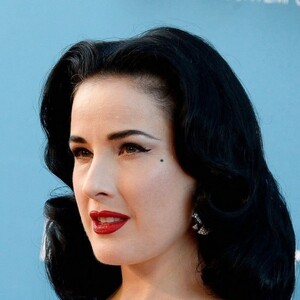