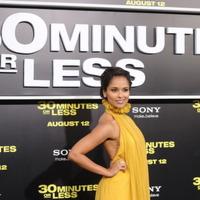 Dilshad Vadsaria Net Worth: Dilshad Vadsaria is an American actress who has a net worth of $1.5 million. Dilshad Vadsaria was born In Karachi, Pakistan in September 1985. She moved to the United States at six years old and studied acting in New York before moving to Los Angeles, California. In 2006 she starred as Dana in the short Within the Ivory Tower and also appeared in an episode of the TV series Vanished. Vadsaria also appeared in the 2006 film Rapture. One of her best known roles came as Rebecca Logan in the TV series Greek from 2007 to 2011. During that time she also appeared in episodes of NCIS, Bones, and CSI: Miami. In 2011 Vadsaria starred as Kate in the movie 30 Minutes or Less. From 2012 to 2013 she starred as Padma Lahari in the ABC television series Revenge. She appeared in the series Melissa & Joey in 2012 and Murder in the First in 2014. Vadsaria was nominated for a NAMIC Vision Award in 2010 for Greek.