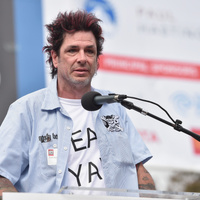 Dick Donato Net Worth: Dick Donato is an American reality television personality and bar manager who has a net worth of $300 thousand. Dick Donato was born in Los Angeles, California in June 1963. He is best known for being the winner of the reality game show Big Brother 8. Dick's daughter Daniele Donato also appeared on Big Brother 8 and finished in 2nd place to Dick. He is the oldest winner in Big Brother history at 44 when he won. Dick returned for Big Brother Season 13 which Daniele but left the house in the first week for personal reasons. He was a stand-in for Keith Richards in Pirates of the Caribbean: At World's End. Donato won $500,000 on Big Brother. He won the Golden Realitini Award for Favorite Reality Performer at the Fox Reality Really Awards in 2007. He was named on TV Guide's Evil Reality TV Villains in 2009. He hosts an online Big Brother recap show Dick at Night for RTVZone.com. Donato appeared in the 2010 film GPS.