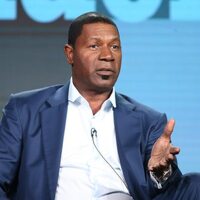 What is Dennis Haysbert's Net Worth and Salary?

Dennis Haysbert is an American actor who has a net worth of $20 million. Dennis Haysbert is probably most famous for playing the roles of President David Palmer on 24, and Sergeant Major Jonas Blane on "The Unit." He is also famously the long-running spokesman for insurance company Allstate.

Dennis Haysbert was born in San Mateo, California, in 1954. He was one of nine children to Gladys and Charles Whitney Haysbert Sr. Haysbert graduated from San Mateo High School in 1972. Standing at 6 ft 5 in tall, he turned down several offers of athletic scholarships to colleges and instead enrolled at the American Academy of Dramatic Arts.

Haysbert's acting career began in television in 1978, starting with a guest role in "The White Shadow." He had many impressive guest-starring roles in television shows like "Growing Pains," "Lou Grant," "Laverne & Shirley," "The A-Team," "Night Court," "Dallas," "The Incredible Hulk," "Magnum, P.I." "and "Duckman." In 1993, he played outlaw Cherokee Jack Jackson in "Return to Lonesome Dove." He later starred in "Lucifer" and "Now and Again."

Haysbert hit his big break in 2001 when he was cast alongside Keifer Sutherland in "24," as U.S. Senator David Palmer, a role that would change his life. He starred in the second and third seasons and returned as a guest star in the last six episodes of season four. For his role, Haysbert was nominated for a Golden Globe and a Golden Satellite Award in 2002. He stated in an interview that the three men he admires most, Jimmy Carter, Bill Clinton, and Colin Powell, collectively inspired his performance in his role of President. Haysbert has also stated that he believes his playing President Palmer on "24" helped Barack Obama to win the 2008 presidential nomination.

Haysbert played Kilowog on the DC Comics "Justice League" and "Justice League Unlimited." Beginning in 2015, Haysbert has been the opening voice introducing NBC's "Meet The Press." He began his co-starring role in "Incorporated" in November 2016, which airs on Syfy and is co-executive produced by Ben Affleck and Matt Damon. He was also cast to play "God" for the second half of the 5th season of Lucifer.

Outside of a lucrative television career, Haysbert has also been in several motion pictures. His first major film role was Pedro Cerrano in "Major League" in 1989. He followed that up with a role in "Navy SEALs" in 1990, co-starring alongside Charlie Sheen and Michael Biehn. He then moved on to another baseball movie, "Mr. Baseball" with Tom Selleck. In 1991, he starred as Nick Sanrio in "K-9000." He reprised his role in 1994 for "Major League II." This was followed by small appearances in films like "Waiting to Exhale," "Heat," and "Absolute Power." In 1998, he reprised his role one more time in "Major League: Back to the Minors." In 1999, Haysbert played a police detective in three films: "The Minus Man," "The Thirteenth Floor," and "Random Hearts." In 2000, he played the role of Zeke McCall in "Love & Basketball," a critical and box office hit. In 2002, he starred in "Far from Heaven," playing gardener Raymond Deagan. He won three Awards (Satellite Award, Black Reel Award, and Washington DC Area Film Critics Association Award) for Best Supporting Actor for that role. In 2005, he had a supporting role in Sam Mendes's film, "Jarhead" and in 2012 voiced a character for "Wreck-It Ralph." In July 2019, Haysbert starred in the Netflix psychological thriller "Secret Obsession." 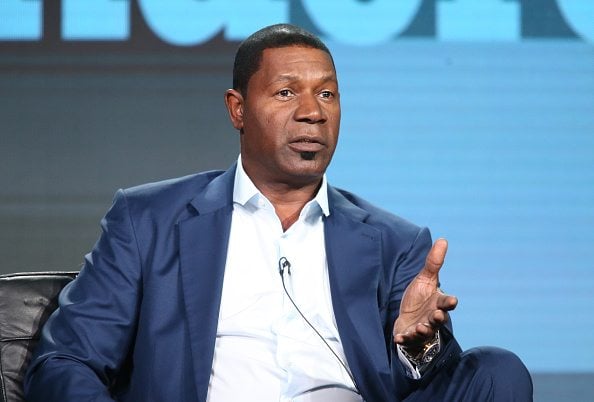 He's also well known in U.S. households as the spokesman for Allstate Insurance, frequently appearing on TV screens asking Americans whether they're "in good hands". In 2008, he was featured in national television ads to raise public awareness about lending discrimination. The ads were commissioned by the U.S. Department of Housing and Urban Development's Office of Fair Housing and Equal Opportunity. He made his Broadway debut in a 2010 production of "Race", which ran from June 2010 to August 2010, voiced ticket sales promos for Brigham Young University's football team and recorded radio commercials for California Senator Barbara Boxer. He also voices the Military Channel's commercials with their official slogan: "The Military Channel. Go Behind the Lines." Haysbert has done voice work for various video games including Tom Clancy's Splinter Cell: Pandora Tomorrow; and served as the narrator in Call of Duty: Finest Hour. He reprised his television role of David Palmer in 24: The Game.

When an actor like Dennis signs on to be a long-running spokesman for a brand like Allstate, they are not paid per commercial. They are paid annual buy-outs which, for someone like Dennis who has held the job for many years, equates to $3-4 million per year. The buy-outs also likely exclude Dennis from doing other endorsements.

Haysbert has been married and divorced twice, and has two children.