What is Denise Richards' net worth?

Denise Richards is an American actress, fashion model and reality star who has a net worth of $12 million. Denise Richards appeared in guest starring roles on multiple television series throughout the early 90s, such as "Saved by the Bell", "Doogie Howser, MD", "Beverly Hills, 90210", "Seinfeld", and "Melrose Place".  However, it was back-to-back roles in two films that were surprise hits, that cemented her status as a household name.  She shot to international recognition with her role in "Starship Troopers" in 1997, and followed that performance up with a racy, and completely different performance, in "Wild Things".  Her work in the two films led to a string of high-profile projects, including "The World is Not Enough", "Undercover Brother", "Scary Movie", "Love Actually", and most recently, "Madea's Witness Protection".  She has also had guest starring or starring roles on such television series as "Friends", "Spin City", "Blue Mountain State", "30 Rock", "Anger Management", and "90210".  While she has worked steadily for over two decades, her personal life has made more headlines.  Her very contentious divorce from Charlie Sheen, with whom she shares two children, made news almost daily from 2005 to 2008.  The two have since buried the hatchet somewhat, and appear to be on civil terms. Richards was ranked #9 by Maxim magazine in a listing of the world's 50 Sexiest Women.

Denise Richards was born on February 17, 1971 in Downers Grove, Illinois, to Joni and Irv Richards. When she was 15, the family moved to Oceanside, California where she graduated from El Camino High School. Shortly after she graduated she began working as a model, traveling to cities like New York, Paris, London, and Tokyo for photoshoots and commercials.

Richards appeared throughout the nineties in several films and TV shows, including 1993's "Loaded Weapon", and guest starring episodes of "Saved by the Bell", "Married with Children", and "Doogie Howser." She also guest-starred in other popular TV shows including "Beverly Hills, 90210" and "Seinfeld."

Denise's big breakthrough came when she got a starring role in 1997's "Starship Troopers." She was nominated for a Blockbuster Entertainment Award for Favorite Female Newcomer and the film grossed $121.2 million worldwide. Next, she starred in the erotic thriller "Wild Things" in 1998 alingside Neve Campbell, Kevin Bacon, and Matt Dillion. She was praised for her transition from the "girl next door" archetype to a villain. Richards was next cast in 1999's Bond film "The World is Not Enough." She was criticized for her performance in the film; Entertainment Weekly magazine dubbed her "the worst Bond girl of all time". She also "won" the 1999 Razzie Award for "Worst Supporting Actress." And yet, she continued to work and remain popular with movie fans. Later that year, Denise made a comeback and gained new fans when she starred opposite Kirsten Dunst in "Drop Dead Gorgeous." The film has been long regarded as a cult classic. In 2001, she had a memorable guest-starring role in "Friends", playing Ross and Monica's cousin. That same year, Richards appeared in four episodes of NBC's popular "Spin City", playing the role of Charlie Sheen's love interest.

She continued to crank out film after film, appearing in "Valentine", "Good Advice", "Undercover Brother", "The Third Wheel", and "Scary Movie 3". She also had a brief appearance in "Love Actually" in 2003, and appeared in two 2004 movies, "Whore" and "Elvis Has Left the Building."

Richards starred as Jolene Butler on the television series "Sex, Love & Secrets" in 2005. In 2009, Richards competed on the reality television series "Dancing with the Stars". From 2010 to 2011 she starred as Debra on the TV series "Blue Mountain State". In 2012, Richards played Kate Needleman in the comedy "Madea's Witness Protection", which grossed over $67 million at the box office. Richards starred as Karen Desai on the ABC Family mystery series "Twisted" from 2013 to 2014.

In 2015 she starred as Marion Bellerose on the television series "Vanity". Denise starred opposite Mischa Barton in 2018's "The Toybox", a supernatural horror film. In February 2019, Richards joined the cast of Bravo's "The Real Housewives of Beverly Hills" for the show's ninth season. Later that year, she began appearing as Shauna Fulton on CBS's soap opera "The Bold and the Beautiful." In September 2019, Denise played an overly-ambitious mother in a Lifetime movie, "The Secret Lives of Cheerleaders." She returned for a tenth season of "Real Housewives", which premiered in April 2020. Denise quickly became a fan favorite and is highly well-liked amongst audiences, who enjoy her more down-to-earth vibe compared to her fellow castmates. 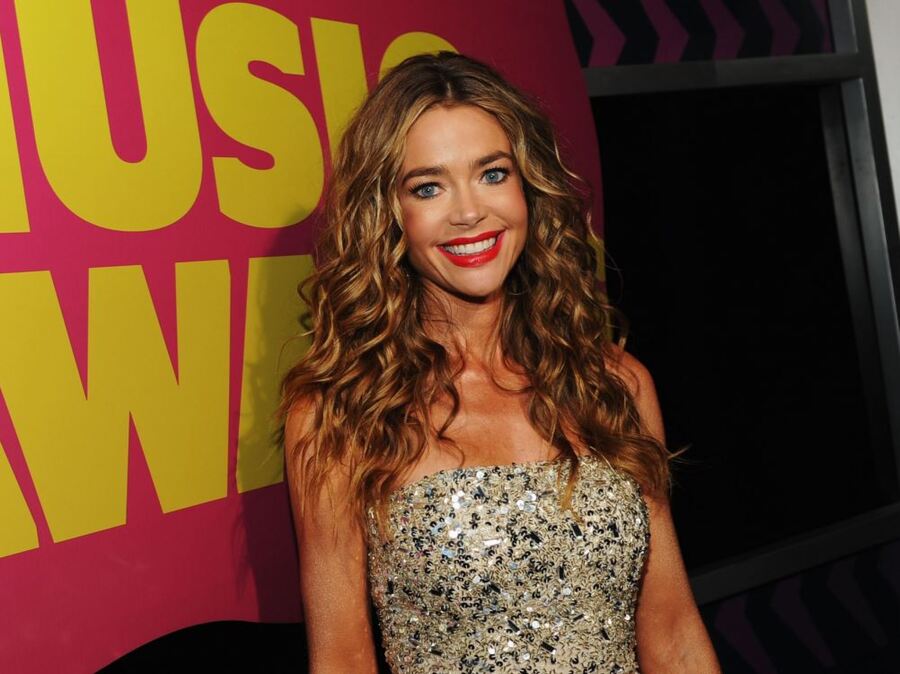 Richards, starting her career out as a model, has graced the cover of thousands of magazines, including Cosmo, Redbook, GQ, and Self, among others. She has appeared in commercials for popular brands like Pepsi and in print ads for various cosmetics. She's also appeared in infomercials for The Flex Belt and she is the brand ambassador of Oro Gold Cosmetics. Richards launched her own fragrance in Spring 2012. In 2019, Denise announced she had developed a skincare line with CBme Beauty.

Richards married Charlie Sheen in June 2002. They have two daughters together. Richards filed for divorce from Sheen while she was pregnant with their second daughter in March 2005. She also sought a restraining order, alleging that Sheen had made death threats against her. Their divorce was finalized in November 2006. In May 2010, Sheen gave up his joint legal custody of their daughters to Richards. Richards had petitioned for sole custody all along, citing Sheen's sobriety issues and the turmoil of their former marriage. In May 2013, Richards was awarded temporary custody of the twin sons born in 2009 to Sheen and his new wife Brooke Mueller after the kids were removed from their home by child protective services due to concerns over drug use. In June 2011, Richards adopted a third daughter as a single parent following a two-year adoption process.

Richards began dating Aaron Phypers in December 2017. They got married in September 2018. Andrew was previously married to actress Nicollette Sheridan.

In 2007, in the wake of her divorce from Charlie Sheen, Denise paid $4.4 million for a large home in the LA suburb of Hidden Hills. She proceeded to spend at least $1 million on renovations. She listed this home for sale in 2015 for $7.75 million. Unfortunately she did not have any takers and in 2018 accepted $4.6 million which was likely a significant loss when you include her renovation expenses.

Outside of her acting career, Denise devotes much of her free time to charities. She is an animal welfare advocate who has worked with Best Friends Animal Society since 2009, as well as the Much Love Animal Rescue. She supports the Dave Thomas Foundation for Adoption, Elizabeth Glaser Pediatric AIDS Foundation, Feeding America, and Children's Hospital Los Angeles, to name a few. She appeared in the NOH8 Campaign and has spoken out in support of gay marriage and LGBTQ rights. Over the years, Richards has walked the runway for numerous charity fashion shows, such as Susan G. Komen's Fashion for the Cure. Denise also dedicates time to raising awareness for the Kidney Cancer Association, after she lost her mother to kidney cancer.