What was DeForest Kelley's Net Worth?

DeForest Kelley was born Jackson DeForest Kelley on January 20, 1920, in Toccoa, Georgia. He was delivered by his uncle at the home of his parents, Clora and Ernest David Kelley. Ernest was a Baptist minister, and Kelley named Bones' father "David" after him. DeForest was named after Lee de Forest, an inventor and electronics engineer. Kelley grew up with older brother Ernest and was deeply involved with his father's church in Conyers. He began singing at an early age and would often perform solos during church services. DeForest later sang on local radio shows, leading to a performance with Lou Forbes at the Paramount Theater in Atlanta. The family moved to Decatur in 1934, and Kelley played on the baseball team at the Decatur Boys High School.

DeForest graduated in 1938 at just 16 years old, and the following year, he visited an uncle in Los Angeles and ended up staying for a year. After returning to Georgia, he told his parents that he was moving to L.A. to pursue an acting career. From March 1943 to January 1946, Kelley served in the U.S. Army Air Forces. During his time as a private first class in the First Motion Picture Unit in Culver City, he was spotted by a talent scout from Paramount Pictures while making a training film for the U.S. Navy. After his military service ended, DeForest was offered a seven-year contract by Paramount Pictures. 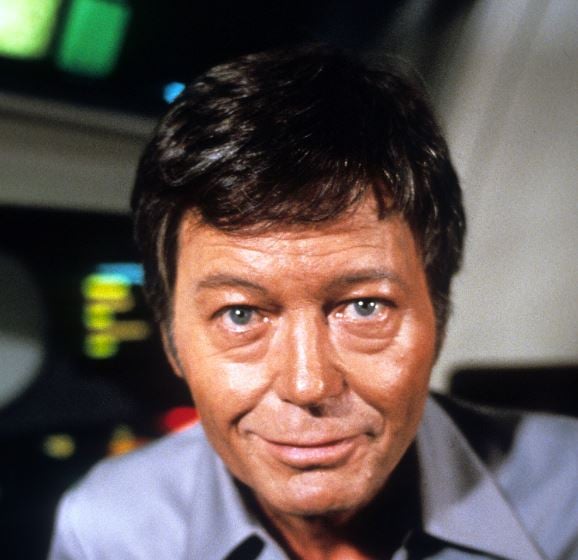 DeForest co-starred with actress Carolyn Dowling in a play in Long Beach in 1942, and they married on September 7, 1945. Kelley's "Star Trek" co-star Majel Barrett (who played Bones' assistant) described DeForest and Carolyn as "the most loving couple you've ever seen in your life."

In 1997, DeForest was diagnosed with stomach cancer, and on June 11, 1999, he passed away at the Motion Picture and Television Country House and Hospital at age 79 with Carolyn by his side. Kelley was cremated, and his remains were scattered over the Pacific Ocean. In a 1998 "Houston Chronicle" interview, DeForest spoke about the fact that Bones had inspired many people to become "all kinds of doctors who save lives." He stated, "That's something that very few people can say they've done. I'm proud to say that I have."

Kelley received a star on the Hollywood Walk of Fame in 1991. Posthumously, he was honored with an In Memoriam Award at the 1999 Golden Boot Awards, and he was inducted into the Online Film & Television Association Hall of Fame in 2020.