How much is Deepika Padukone Worth?

Deepika Padukone net worth and salary: Deepika Padukone is an Indian actress and a former model who has a net worth of $40 million. Deepika Padukone has earned her net worth from roles in dozens of major Hindi and Tamil as well as Kannada films. Today she earns approximately $10 million per year from her endorsements and film appearances. She is considered one of the most high-profile celebrities in India.

Early Life: Deepika Padukone was born in Copenhagen, Denmark, on January 5, 1986. She was born to Konkani-speaking parents Prakash Padukone, a professional badminton player, and Ujjala, a travel agent. She has a younger sister, a golfer named Anisha. She also played badminton competitively from a young age and competed at national championships. The family moved to Bangalore, India when Deepika was one year old. Deepika became involved in the fashion modeling industry while attending Sophia High School and enrolled later at the Indira Gandhi National Open University to study sociology. She later quit college because of her conflicting modeling schedule.

Career: Padukone initially gained attention for various television commercials and modeling gigs. She made her runway debut in 2005 and won the Model of The Year award at the Kingfisher Fashion Awards. She appeared in a popular print campaign for the 2006 Kingfisher calendar, which gained her national attention. At 21, Deepika moved to Mumbai and lived with her aunt and gained wider recognition when she featured in a music video for Himesh Reshammiya's song "Naam Hai Tera".

Her acting breakthrough came in 2006 in the Kannada film Aishwarya. Padukone also appeared in the Hindi blockbuster film Om Shanti Om. It was the highest-grossing film of the year and earned $21 million USD. For her performance in this film, she won the Filmfare Best Female Debut Award.

Padukone's starring role in the 2012 romantic comedy Cocktail was a turning point in her career. The film was met with mixed reviews, but overall Padukone's performance was praised. The role earned her several Best Actress nominations and was also a box office smash. By 2013, she was an established leading actress of Hindi cinema, featuring in four of the top-earning movies of the year. One of those was Chennai Express, which emerged as one of the highest-grossing Indian films of all time, earning over $55 million USD. Padukone's performance in this movie, along with Goliyon Ki Raasleela Ram-Leela, won her many awards, including the Screen Award and the Filmfare Award for Best Actress.

Padukone had a small feature role in the film Kochadaiiyaan in 2014 and was paid $420,000 USD for just two days of work on the set. Later that year, she starred as a bar dancer who trains a group of rag-tag dancers for a dance competition in the feature film Happy New Year. This film became her most commercially successful yet, earning $48 million USD worldwide.

In 2015, Padukone starred in the fourth-highest-grossing Bollywood film of the year, Bajirao Mastani. For this film, she had to learn sword fighting, horse riding, and martial arts. Bajirao Mastani was named Best Film at the 61st Filmfare Awards, and Padukone garnered her second Best Actress nomination of 2015.

Padukone played the lead female role in an action film, 2017's XXX: Return of Xander Cage, which was her first Hollywood project. The film was released to critical reviews but went on to earn $345 million USD worldwide. She received three Teen Choice Awards nominations for her role as Serena Unger, opposite of Vin Diesel. In 2018, Padukone was involved in the period drama Padmaavat. It was estimated to be one of the highest-budgeted and expensive Hindi films and remains Padukone's highest-grossing release as of this writing. It's one of Indian cinema's biggest grossing movies, with earnings of $76 million USD. For Padukone's role, she scored another Filmfare Best Actress nomination.

In 2018, Padukone formed her own production company, Ka Productions. She produced her first film, Chhapaak, in 2020 and also played the starring role. She had to wear prosthetic makeup all day on her face to portray and acid attack survivor and found it to be the most taxing and challenging role so far in her career.

Other Ventures: Padukone has written many pro-feminism columns and has been heavily involved with women's health and fitness magazines. She adopted the village of Ambegaon in 2015 to provide the village with electricity.

Padukone launched her own clothing line for women in 2014 and collaborated with Myntrra to launch another line called All About You. Later that year, she performed on a North American concert tour called Slam! The Tour, in which she sang alongside her Happy New Year costars.

In 2016, she launched a campaign for a mental health awareness foundation called More Than Just Sad. The goal is to assist physicians in improving care for patients suffering from depression and anxiety. Padukone has been outspoken about her own issues with depression and anxiety. She was appointed as the chairperson of the Mumbai Academy of the Moving Image in 2019. She was awarded the Crystal Award in 2020 by the World Economic Forum for speaking out on awareness surrounding mental health issues.

Personal Life: Padukone lives in the Prabhadevi neighborhood in Mumbai. She is a practicing Hindu and considers religion to be a very important aspect of her life. She dated Ranbir Kapoor in 2008, but the couple broke up one year later. She began dating a frequent co-star, Ranveer Singh, in 2012 and the couple married in Lake Como, Italy in November 2018. 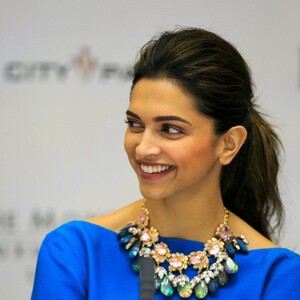