How much is Declan Donnelly Worth?

Declan Donnelly net worth and salary: Declan Donnelly is an English television presenter and actor who has a net worth of $40 million dollars. Declan Joseph Oliver Donnelly was born in Newcastle upon Tyne, England in September 1975. He is best known for being one half of the English TV duo Ant & Dec with Anthony McPartlin. Donnelly is the youngest of seven children. He starred as Duncan in the TV series Byker Grove from 1989 to 1992. On that set he met McPartlin. The duo have hosted Ant and Dec's Saturday Night Takeaway, I'm a Celebrity…Get Me Out of Here!, Britain's Got Talent, Ant & Dec's Push the Button, and Red or Black?. They gained international exposure in 2009 after they interviewed Susan Boyle. The duo has their own production company called Mitre Television. Dec also starred in the films Love Actually and Alien Autopsy. Ant & Dec signed a $30 million pound contract with ITV in 2007. They donated money from their single "Let's Get Ready to Rhumble" to the charity ChildLine. In 2013 the pair opened the W4 Youth Centre. Donnelly has won British Comedy Awards, National Television Awards (UK), Royal Television Society awards (UK), Television and Radio Industries Club Awards, and a TV Quick Award (UK). 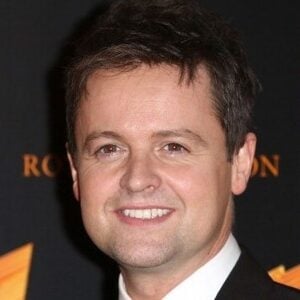