How much is Debra Messing Worth?

Salary: At the peak of "Will & Grace", Debra was paid $250,000 in base salary alone (does not include royalties). That works out to around $6 million per season.

Early Life: Debra Lynn Messing was born in Brooklyn, New York on August 15, 1968. Her mother Sandra worked as a professional singer, banker, and travel agent, and her father Brian Messing was a sales executive for a costume jewelry manufacturer. When she was three, she and her family moved to East Greenwich, Rhode Island. During her high school years, Messing acted and sang in several high school productions at East Greenwich High School, including starring roles in "Annie" and "Grease." Messing attended Brandeis University and was encouraged by her parents to complete a liberal arts degree before officially deciding to pursue acting as a career. She then graduated from New York University's Tisch School of the Arts, earning a Master's Degree in three years.

Career: In 1993, she won acclaim for her performance as Harper in the pre-Broadway workshop production of "Angels in America." Messing appeared on the TV series "NYPD Blue" in 1994 and 1995. Her film debut came in 1995's "A Walk in the Clouds." She then co-starred on the Fox series "Net & Stacey" from 1995 to 1997. She starred in two episodes of "Seinfeld" in 1996 and 1997. She co-starred that same year with Tom Arnold in "McHale's Navy." In 1998, she played a leading role in ABC's science fiction TV show "Prey." It was during this time that her agent approached her with the pilot script for "Will & Grace." She was hesitant to take time off of "Prey," but was intrigued by the script, so she auditioned for and won the role of Grace Adler.

Messing played Grace on the extremely popular and award winning "Will & Grace" on NBC from 1998 to 2006 and the show made her a household name. She was named 50 Most Beautiful People in the World by People in 2002 and TV Guide picked her as its Best Dressed Woman in 2003. She appeared in a small role in Woody Allen's film "Hollywood Ending" in 2002. She starred in USA's "The Starter Wife" in 2008, which was nominated for ten Emmy Awards, as well as "Smash" in 2012-13. She has starred in the films "Along Came Polly," "The Wedding Date," which was her first leading role in a high-profile and box office scoring hit, and "Nothing Like the Holidays." She provided the voice of Arlene in the 2004 film "Garfield." In 2005, Messing was a judge on the season finale of season 2 of Bravo's "Project Runway." In July 2011, she was ranked No. 22 on the TV Guide Network's "Funniest Women on TV" list.

Messing made her Broadway debut in John Patrick Shanley's play "Outside Mullingar." It was nominated for a Tony Award Best Play of the 2014 season. In 2014, she starred in the police procedural television show "The Mysteries of Laura." It lasted for two seasons and ended in 2016. In 2015, Messing appeared in four episodes of "Celebrity Jeopardy."  In May 2017, Messing portrayed Marjorie Houseman in the television remake of the film "Dirty Dancing" from 1987. From September 2017-April 2020, Messing reprised her role of Grace Adler on the NBC revival of "Will & Grace." In 2020, Messing appeared in two feature films, "Irresistible" and "The Dark Divide."

Accolades and Honors: Over the course of her career, Messing has won a Primetime Emmy Award in 2003 and has been nominated for six Emmys, eight Golden Globes, and eight Screen Actors Guild Awards. She was nominated in 2005 for Favorite Funny Female Star in the People's Choice Awards. In 2005, along with her "Will & Grace" co-star, Megan Mullally, she was awarded the Women in Film Lucy Award in recognition of her "excellence and innovation in her creative works that have enhanced the perception of women through the medium of television." In 2017, Messing was honored with the Excellence in Media Award by GLAAD. In October 2017, she was inducted into the Hollywood Walk of Fame and received a star for her contribution to television.

Personal Life: Debra met actor and screenwriter Daniel Zelman on their first day as graduate students at NYU in 1990. They got married in September 2000. They had a son together, Roman, in April 2004. They separated after 11 years of marriage in December 2011. Messing filed for divorce in June 2012 but the divorce was not officially completed until March 1, 2016. She dated her "Smash" co-star Will Chase from 2011 to October 2014.

In March 2020, Messing, and outspoken critic of President Trump's handling of the COVID-19 pandemic, shared a video and a tweet referring to him as a "Liar in Chief" and said that innumerable people, including him, will die because of his lies and inaction, questioning MAGA supporters at the same time if they realized that Trump should be voted out of office in the 2020 Presidential election. She was one of many celebrities who either urged American citizens to take the COVID-19 outbreak seriously and/or criticized leadership during the outbreak. 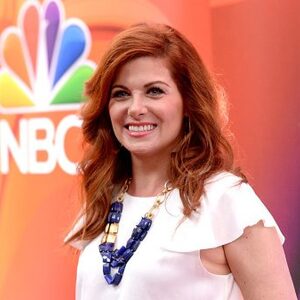