What is Dean Norris' net worth and salary?

Dean Norris is an American actor who has a net worth of $5 million. Dean is best known for playing the role of Hank Schrader on the AMC series "Breaking Bad." He appeared in 51 episodes of the series (out of 62) between 2008 and 2013. He also reprised the role in the spin-off "Better Call Saul." Outside of the Breaking Bad universe, Dean has appeared in dozens of movies and television shows in a career that dates back to the early 1980s.

Dean Norris was born in South Bend, Indiana on April 8, 1963, the son of Rosemarie and Jack B. Norris. Norris has two sisters, Connie and Nikie. He graduated as valedictorian from Clay High School in 1981 and went on to graduate from Harvard University with a degree in Social Studies in 1985. From there, he went on to attend the Royal Academy of Dramatic Art, earning a diploma in 1987.

Norris began his professional acting career in the mid-80s with starring in "Tremors: The Series" and in the film "Without Limits."  From there, he gained several guest-starring and recurring roles on various television shows and in television movies, including "The West Wing," "NYPD Blue," "The X-Files," "Lost", "Blind Alleys", "The Equalizer", "Leap of Faith", "Beauty and the Beast", and "When You Remember Me". He then began adding film credits to his resume, appearing in such projects as "Lethal Weapon 2", "Total Recall", "Terminator 2: Judgment Day", "The Last Seduction", "Without Limits", "Little Miss Sunshine", and "The One".

Beginning with the show's premiere in 2008, Norris played DEA agent Hank Schrader on "Breaking Bad." He played the role until its final season in 2013. His performance on "Breaking Bad" received much critical acclaim.

Norris also gained recognition when he starred in the CBS series "Under the Dome," based on the Stephen King novel of the same name. In it, he plays James "Big Jim" Rennie, a selectman and the only town council member in the area which is cut off from the rest of the United States. For his role on "Under the Dome," Norris was nominated for a Saturn Award for Best Supporting TV Actor. Beginning in 2017, Norris began starring as mob boss Clay "Uncle Daddy" Husser in the TNT series "Claws." In 2020, Norris reprised his role of Agent Hank Schrader on-screen in the "Breaking Bad" prequel "Better Call Saul" during season five of the show.

Norris has been married to former entertainment attorney Anne Bridget Sorenson since October 27, 2001. They live with their five children in Temecula, California. In 2018, they opened the Norris Performing Arts Center in Murrieta, California.

On "Breaking Bad" his character was known for making home-made beer that he called Schraderbrau. In 2019 Dean was involved in the launch of a real-life beer named Schraderbrau. 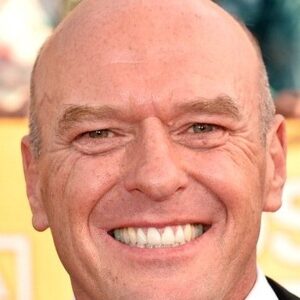