David Niven net worth and salary: David Niven was an English actor and author who had a net worth equal to $100 million at the time of his death, adjusting for inflation. David Niven was born in Belgravia, London, England in March 1910 and passed away in July 1983. He had more than 100 acting credits to his name and starred as Alec Fleming on the television series The Rogues from 1964 to 1965.

Niven started out as an extra and appeared on stage and radio as well. He appeared in several films including Cleopatra, Barbary Coast, Three Blind Mice, Wuthering Heights, The Moon Is Blue, Carrington V.C., Around the World in 80 Days as Phileas Fogg, My Man Godfrey, Separate Tables, The Pink Panther, Casino Royale as James Bond, and many more. Niven won an Academy Award for Best Actor in a Leading Role for Separate Tables in 1959. He also won a Golden Globe Award for the same role and another for The Moon Is Blue. He received two stars on the Hollywood Walk of Fame for Motion Picture and Television. He also served in the British Army. David Niven passed away on July 29, 1983 at 73 years old. 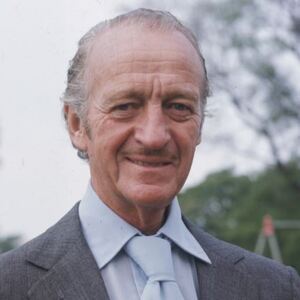