David Burtka net worth: David Burtka is an American actor and chef who has a net worth of $3 million. David Burtka has earned his net worth as an entertainment news correspondent for E! News. Burtka who also a singer was born on May 29, 1975 in Dearborn, Michigan, grew up in Canton, Michigan.

He is a 1993 graduate from Salem High School and he was educated in acting at Interlochen Center for the Arts, and he earned a Bachelor of Fine Arts at the University of Michigan and had further training at the William Esper Studios. Currently he is engaged to fellow actor Neil Patrick Harris from the CBS ensemble sitcom How I met Your Mother. Burtka made his Broadway debut in the 2003 Tulsa production of Gypsy which starred famous actress Bernadette Peters. He won the 2001 Clarence Derwent Award for most promising male performer in The Boy in the American premiere of Edward Albee's The Play About the Baby. He also played the role of Matt in the 2004 musical The Opposite of Sex reprised the role in the work's East Coast premiere in the summer of 2006.His first performance on television was the 2002 guest role on The West Wing, guest appearances on Crossing Jordan. In five episodes of How I Met Your Mother the actor played "Scooter", the former high school boyfriend of Lily (Alyson Hannigan). He decided to become a chef and left acting in 2009 to attend the Le Cordon Bleu College of Culinary Arts Pasadena and then he ran the Los Angeles catering company, Gourmet M.D. 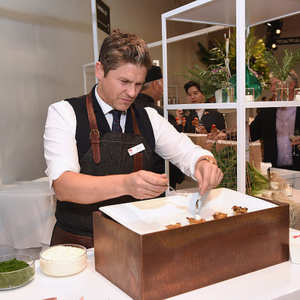