Darcy LaPier net worth: Darcy LaPier is an American actress and model who has a net worth of $10 million dollars. Darcy LaPier was born in Oregon and first made a name for herself in Hollywood, when she was chosen to be the Oregon representative for the Hawaiian Tropic Beauty Contest in 1985.

She went on to marry the President of Hawaiian Tropic, Ron Rice, in 1990. They had one child together before the marriage ended in 1993. The marriage was actually annulled, when it came to light that she had never actually divorced her first husband, Larry Rae Robertson. During her years with Ron Rice, she launched an acting career, appearing in such projects as "Think Big", "Dream Trap", "Drive Me Crazy", and "Double Trouble". She married Jean-Claude Van Damme in 1994, and also appeared in his film, "Street Fighter". They divorced in 1997. She subsequently married Mark Hughes, the founder of Herbalife. He passed away within the year. She is currently focused on a career on the rodeo circuit, and is the star and executive producer of "Rodeo Girls" on A&E. 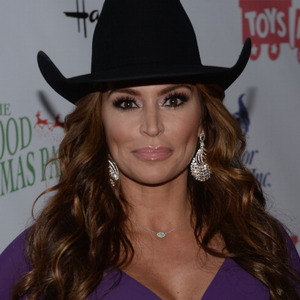