Darby Stanchfield Net Worth and Salary: Darby Stanchfield is an American actress who has a net worth of $4 million dollars. She is best known for her role as Abby Whelan in the TV series Scandal. She has also appeared in shows like Mad Men, Jericho and Locke & Key.

Darby Stanchfield was born in Kodiak, Alaska in April 1971. Darby graduated from the University of Puget Sound and the American Conservatory Theater in San Francisco. Her first role came in 2000 on the television series Diagnosis Murder. Over the years Stanchfield has appeared in episodes of American Dreams, Monk, Without a Trace, 24, Nip/Tuck, Bones, Cold Case, Private Practice, The Mentalist, Ghost Whisperer, CSI: NY, CSI: Miami, How I Met Your Mother, Burn Notice, and Castle. From 2006 to 2007 she starred as April Green in the series Jericho and in 2007 she starred as Amelie Joffe on the soap opera General Hospital. From 2007 to 2008 she had a recurring role on Mad Men as Helen Bishop. From 2006 to 2012 she starred as Shannon Gibbs in the series NCIS. Starting in 2012 she has played Abby Whelan in the ABC series Scandal. Darby won the Angel Film Award for Best Supporting Female Actor, Short Film at the Monaco International Film Festival in 2009. In 2013 she won a TV Guide Fan Favorite Award for Scandal.

Real Estate: In 2009 Darby paid $1.8 million for a 4,000 square-foot home in Glendale, California. She listed this home for sale in August 2020 for $2.4 million. In 2004 she bought a four-unit rental property in LA's Silver Lake neighborhood. She continues to own this property. 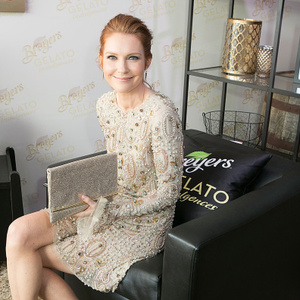