Daniel Kaluuya Net Worth: Daniel Kaluuya is a British actor and writer who has a net worth of $15 million. Daniel is best known for his roles in movies like "Get Out" (2017) and "Black Panther" (2018), and he first became internationally known after appearing on a memorable episode of the television series "Black Mirror" in 2011. In 2021, Kaluuya starred in the film "Judas and the Black Messiah," which earned him a Golden Globe Award and an Oscar nomination. Before breaking through in the acting world, Daniel made his way as a playwright, and he wrote two episodes of the British series "Skins," which he starred on from 2007 to 2009. He also served as an executive producer on his 2019 film "Queen & Slim." In 2009, "Screen International Magazine" named Kaluuya a UK Star of Tomorrow.

Early Life: Daniel Kaluuya was born on February 24, 1989, in London, England. His parents, Damalie and Stephen, are both from Uganda, and he has one sibling, an older sister. Daniel was raised by his mother on a council estate in London after spending the first two years of his life living in hostels, and his father, who lived in Uganda, rarely visited the family because of visa regulations. Kaluuya attended an all-boys Catholic school called St Aloysius College, London.

Career: Daniel started writing plays at just 9 years old, and soon after, he took an improv class at the Anna Scher Theatre School and began acting with that company and WAC Arts. He made his television debut in the 2006 television play "Shoot the Messenger," and the following year, he appeared on "The Whistleblowers" and "Comedy: Shuffle" and began playing Posh Kenneth on "Skins." Kaluuya wrote the episodes "Jal" and "Thomas" and was a contributing writer on other episodes during the show's first two seasons. In 2008, he appeared in the film "Cass" and the TV series "Delta Forever," "Silent Witness," and "That Mitchell and Webb Look," and he appeared on "Doctor Who," "Lewis," "FM," "The Philanthropist," and "10 Minute Tales" in 2009. From 2009 to 2011, Daniel played Michael "Tealeaf" Fry on 12 episodes of "Psychoville," and he had a recurring role on "Harry and Paul" from 2010 to 2012.

Kaluuya appeared in the films "Chatroom" (2010), "Johnny English Reborn" (2011), "Welcome to the Punch" (2013), and "Sicario" (2015) and played supervillain Black Death in 2013's "Kick-Ass 2." In 2010, he earned critical acclaim for his performance in a Royal Court Theatre production of Roy Williams' "Sucker Punch," and he won a Critics' Circle Theatre Award and Evening Standard Award. He later appeared in London productions of Arthur Wing Pinero's "Trelawny of the Wells" (2013), Aimé Césaire's "A Season in the Congo" (2013), and Joe Penhall's "Blue/Orange" (2016). Daniel appeared in the British supernatural drama "The Fades" and the "Fifteen Million Merits" episode of "Black Mirror" in 2011. After "Black Mirror" was released on Netflix a few years later, Kaluuya's performance caught the attention of actor, comedian, and director Jordan Peele, who cast him in 2017's "Get Out." The film was a hit, grossing $255.4 million against a $4.5 million budget, and it earned Daniel more than a dozen awards. His next film, 2018's "Black Panther," which co-starred Chadwick Boseman, Michael B. Jordan, and Lupita Nyong'o, was a massive success, bringing in $1.348 billion at the box office.

Daniel then appeared in 2018's "Widows" and 2019's "Queen & Slim," and he voiced the Ghost of Christmas Present in 2020's "A Christmas Carol." In 2021, Kaluuya portrayed revolutionary socialist and activist Fred Hampton in the biopic "Judas and the Black Messiah" and won several awards for his performance. He has also appeared on the 2014 series "Babylon" and the short films "Much Ado About a Minor Ting" (2007), "Baby" (2010), "Beginning" (2012), and "Jonah" (2013), and he voiced Bluebell in the 2018 miniseries "Watership Down." In 2019, it was reported that Kaluuya was set to produce a film based on the PBS series "Barney & Friends" through his production company, 59%, in conjunction with Mattel Films. 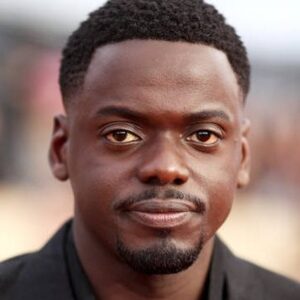