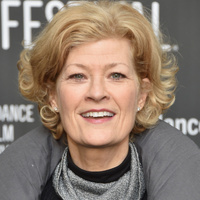 Dana Wheeler-Nicholson net worth: Dana Wheeler-Nicholson is an American actress who has a net worth of $500 thousand. Dana Wheeler Nicholson was born in New York, New York, and began her professional on-camera career in the mid-80s, when she was in her twenties. She has worked steadily ever since. Some of her projects include, "The Little Drummer Girl", "Mrs. Soffel", "The Hitchhiker", "Beverly Hills Buntz", "Circuitry Man", "Palace Guard", "Tombstone", "Fortune Hunter", "Frank & Jesse", "Bye Bye Love", "Seinfeld", "Denise Calls Up", "The Pompatus Of Love", "The X-Files", "Sex & the City", "NYPD Blue", "Law & Order", "All My Children", "Without a Trace", "The Battle of Shaker Heights", "Boston Public", "Grounded for Life", "Boston Legal", "Fast Food Nation", "Law and Order: Criminal Intent", and "The Deep End". She is most widely recognized for her co-starring role in the film "Fletch", and for her recurring role on "Friday Night Lights".