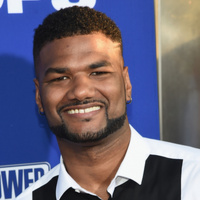 Damien Dante Wayans net worth: Damien Dante Wayans is an American actor, screenwriter, director and producer who has a net worth of $2 million. Damien Dante Wayans was born in New York City, New York in April 1980. He is a member of the Wayans family and starred as Damien in the television series Second Generation Wayans in 2013. In 2014 he starred as David Berenger in the TV series Single Ladies. Wayans has starred in the movies Major Payne, Don't Be a Menace to South Central While Drinking Your Juice in the Hood, Malibu's Most Wanted, Edison, Man About Town, and Littleman. He served as a writer, director, and supervising producer for the television series My Wife and Kids. Wayans was also a writer, director, and producer for the TV series The Underground and the movie Dance Flick. In 2005 he was nominated for BET Comedy Awards for Outstanding Directing for a Comedy Series and Outstanding Writing for a Comedy Series for My Wife and Kids.