Dale Robertson Net Worth: Dale Robertson was an American actor who had a net worth of $5 million. Born Dayle Lymoine Robertson (July 14, 1923 – February 27, 2013) in Harrah, Oklahoma County, Oklahoma, US, he is best remembered for his starring roles on television and his turns in Western movies. Before joining the Oklahoma Military College at the age of 17, he earned his living as a professional prize fighter.

Throughout the World War II, he fought bravely for the US on the fronts in North Africa and Europe, thus being honored with the Bronze and Silver Stars, as well as the Purple Heart. Unbelievable as it may seem, Robertson entered the world of Hollywood after he was recruited by movie scouts who saw a picture he had taken for his mother in a photo shop window. He was still serving in the South pacific when he first started receiving letters from film agents. Once the war was over, Robertson decided to stay in California and take his chance in the movie industry. Under the sway of Will Rogers Jr., he didn't take any acting lessons in order to keep his persona untainted. The beginning of his career marks his appearance on the popular TV #92 in various television weeklies. As for his film credits, they include his turns in 1949's features Fighting Man of the Plans and Flamingo Road. After he switched to TV in the 1950s, he starred in such series as Tales of Wells Fargo, Iron Horse and Death Valley Days. Often presented as a deceptively thoughtful but modest western hero, he also appeared on Dallas and Dynasty. Last, he could be seen playing the role of Zeke in Harts of the West in the early 1990s. After he retired from the show biz, Robertson lived on his ranch in Yukon, Oklahoma and moved to the San Diego area last year. The eighty three year old actor lost the battle against cancer an pneumonia in February 2013, leaving behind his wife and two children. 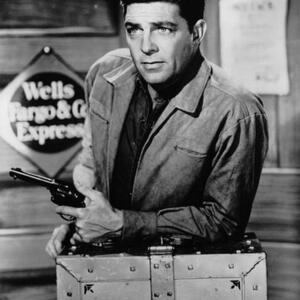